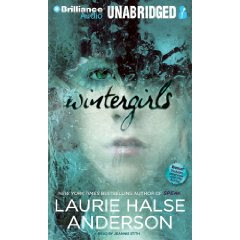 The Plot: Lia's best friend, Cassie, is dead. Before she died, Cassie called Lia thirty-three times. Lia didn't answer; the two had stopped talking, stopped being friends. But they had never stopped being partners -- partners in the race to see who could be skinniest.

The Good: Anderson captures the tortured thoughts and worldview of Lia, who, to put it mildly, has serious problems. She starves herself; cuts herself; berates herself (stupid/ ugly/ stupid/ bitch/ stupid/ fat/ stupid/ baby/ stupid/ liar/ stupid/ lost); sees herself as fat; and sees ghosts. Sees Cassie. Everywhere. Haunting her; taunting her; encouraging her. In audio, especially, Cassie's words twist into your heart and your head.

Lia and Cassie, now seniors, have been friends since they were little. Anderson doesn't point to any one point where the two went from "normal" girls to girls who didn't eat or -- in Cassie's case -- eats and throws up. There are a couple of flashbacks (Cassie learning to throw up at drama camp, the girls vowing to be the "thinnest" in school because it was an obtainable goal) to individual moments that reflect when they start being sick, but no answers as to why. This is an immersion into Cassie's life and struggle, including her sickness, with the constant question being -- is this it? Is this the moment she dies? Or is this the moment she decides to live?

The narrator and production team does a great job of signalling not just other people's voices but also Cassie's own voice -- both the things she says and the things she doesn't say.

Lia meets a boy, Elijah. And guess what? Elijah is not a love interest. Thank you, thank you, thank you. He does provide a perspective outside of a family dynamic that is all twisted around Lia and her problems; it's a great balance when he, who has been beaten by his father, asks Lia, why she doesn't want to live with her mother. What has she done, he asks, imagining the worst. You can tell that her answers don't satisfy him. But the thing is, Lia's problems have no real answer.

There has been talk about whether Wintergirls could be not only a "handbook" for girls with eating problems, but also a trigger. I'm not going to pretend to be an expert on eating disorders; reading this, I did begin thinking about the calories I was eating. But I was also repulsed by the damage described to Cassie's and Lia's bodies; reading of Lia's starvation made me hungry. Wintergirls obviously describes a girl who is mentally ill, living an unhealthy life that is not to be envied. And it's a mental illness -- not a choice. Someone suffering from it will find their guidebooks and handbooks, either in books, TV shows, magazines, or from their friends. They will find their encouragement in articles like this one, where the author almost boasts about anorexia. Wintergirls provides a realistic, sympathetic, and frightening look at a very real illness. As a YPulse contributor said, "Laurie Halse Anderson’s exquisite novel provides a better understanding of the disease and is sure to spark further, much needed discussions the true causes, societal pressures, consequences, and ways to help and prevent."

It was an incredibly emotional book. It will stick with you for a while. And the audio was excellent -- I agree.

I haven't read Wintergirls (yet, I'm still reading Perfect Girls, Starving Daughters and I just cannot do the two of them back to back). Eating disorders strikes me as one of those topics where there author is going to be criticized no matter how they write about it. If they write about it realistically (which is the impression I get with this one), they are slammed for making it too realistic and creating a "guide" (as if people need it with all the pro-ana sites out there, sigh). If they don't write realistically they are treating it flippantly or not taking it seriously.

Every review by a blogger I've read about this book said that it was excellent. Tough to read and it sticks with you, but excellent.

My library finally ordered a copy so I get to read it soon! I've heard such good things. I heard a bulimic girl say in an interview once that she learned all her "tricks" from books and movies with themes the same as Wintergirls, and I just felt so sad that she was blind to the overarching message that they contained.

As noted in my 48 HRC entry on this book (http://www.rascofromrif.org/?p=2231) I applaud Laurie Halse Anderson for this powerful book. Based on work when I was counseling young pre-teens and teens in the early 70's, this is a welcome addition to the literature!

I've been struggling with anorexia for almost three years now. I've read several teen books about the subject, but this is the only one I've liked. Laurie depicts it perfectly--I felt like she had quoted my very thoughts. Also, I love Laurie's writing. She uses such unique styles. I couldn't stop reading this book, and I purchased it the after finishing.