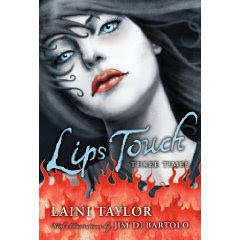 by Laini Taylor. Illustrated by Jim Di Bartolo. Arthur A. Levine Books, an imprint of Scholastic. October 2009. Reviewed from ARC; ARC from BEA.

The Plot: Three stories that hinge on a kiss. In Goblin Fruit, Kizzy wants to be someone different, somewhere different, she wants to be kissed; In Spicy Little Curses Such As These, Ana wants to be loved and accepted; and in Hatchling, Esme is haunted by memories that are not her own.

The Good: In Goblin Fruit, Kizzy is a girl who should know better. Her people are well aware that goblins are real, even though they live in the modern world and Kizzy knows that ghosts are real. Kizzy wants -- wants what? She wants. And the new boy in school, who is so fine, who seems to want her, may be the answer to her prayers. Taylor takes Christina Rossetti's Goblin Market a step further in time. Fruit out of season may be a clue that the goblin is tempting you; but there are more temptations than fruit.

Ana is cursed at her christening in Spicy Little Curses Such As These. In this twist of Sleeping Beauty, her curse is to kill. Any who hears her voice will die. She is blessed with self-control to never utter a sound. James falls in love with Ana, Ana with James. The battle fields of the Great War taught him to be rational and not believe in miracles and magic. He doesn't believe in curses and wishes she would talk. And instead of the reader being rational and believing as James does, we see what he doesn't. A world where an old lady engages in dangerous trades to save children from Hell and Ana's voice is the price paid.

In Hatchling, Esme has been raised in London by an eccentric mother. Her mother's oddness suddenly makes sense, or at least seems less odd, when Esme awakes to find that instead of two brown eyes she has one brown, one blue. Wolves are hunting them and Esme remembers things she know never happened. At least, never happened to her. Including a kiss. Who is Esme? What secrets does she hold?

I love the twists to tales that Taylor gives; taking Goblin Market to modern times. Creating a Sleeping Beauty who can kill with a whisper -- or a shout. And lastly, a story that seems to be about Esme -- until we find out there is more to Esme than meets the eye.

I kept turning down pages to mark language and phrases:

"The goblins want girls who dream so hard about being pretty their yearning leaves a palpable trial, a scent goblins can follow like sharks on a soft bloom of blood. The girls with hungry eyes who pray each night to wake up as someone else. Urgent, unkissed, wishful girls."

"She wanted to climb out of her life as if it were a seashell she could abandon on a shore and walk away from, barefoot."

"Kizzy felt, for an instant, as if her blood fizzed inside her like champagne."

"Once, he might have believed [his survival] to be the work of Providence, but it seemed to him now that to thank God for his life would be to suggest God had shrugged off all the others, flicked them away like cigarette butts by the thousands, and that seemed like abominable conceit."

Since this an ARC, it didn't have the complete art work. The cover gives a taste. While these are tales about being kissed, or wanting kisses, or the price of kissing, it is not a "romance", per se, though I would give it to people looking for stories about love. Since it's not a traditional romance, then, it doesn't have a traditional romance cover. Rather, the girl you see is one who looks haunted and who will haunt you. Two colors: red and blue. Blue eyes that are striking -- almost disturbing. Otherwordly. And of course the lips are red -- but not smiling. Full, kissable lips -- but not smiling, not inviting, not happy. This is the face of a girl turning into a woman, haunted, haunting, striking, inviting you in yet keeping you at arm's length.

The sketch art for the first story is supplied, relating in pictures the story of Rossetti's Goblin Wood and ending with a portrait of Kizzy. Loved it; and I cannot wait to see the finished book.

You need to stop reviewing things I like. My already out of control request list gets even longer every time I come here! ;)

We're on the same reading kick I see - first "Ash" and now "Lips Touch". It's going in my Oct column also and I just posted on it - I have links to Laini's blog where she posted some of the final art for the book. GORGEOUS!

I've been wanting to read this since I first saw the preview Laini gave of the artwork, but this review makes me want to read it even more. Thanks for posting!