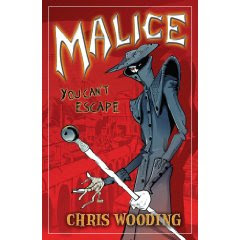 The Plot: "Tall Jake, take me away." Combine the right things in the right type of bowl. Set them afire. Say the right words six times. And Tall Jake comes to take you away -- away to Malice. A place of nightmares seen only in a secret comic book.

Luke says it. And disappears. His friends Seth and Kady decide to investigate. How far will they go to find out whether Malice is real? "Tall Jake, take me away."

Wooding once again does a fabulous job of creating a complex other world, with geography and mythology fully formed but never fully revealed. There is the real world of England, where Luke, Seth and Kady live; and then -- there is no getting around it -- there is the real world of Malice, inhabited by mechanical monsters and traps and deaths out of a gorefest horror film.

An unhappy teen, looking for escape or adventure, conducts the ritual and finds himself in a world where all the rules have changed. Up is down; down is up; time stops and speeds up; nothing is safe; there is no rest. The geography of Malice is strange, jumbled, shifting. And the possibility of death is not just real -- it's more likely than survival. And more likely than escape.

Why would anyone want to take the risk of going to Malice? One look at the comic book -- and pages of the comic book in black and white are incorporated into this book -- shows a nightmare landscape with hellish mechanical creatures that attack, kill, tearing teens limb from limb. Seth wants to save Luke. But what is the lure for other teens? To go to Malice... to stay... to escape. Malice offers something to them; something Tall Jake gives. A chance at something... something else. Something different. Remember, nightmares are still dreams. By the time you realize the dream isn't what you wanted it to be, it's too late.

In trying to understand Malice, one of the teens caught up in it says about the power of belief and the attraction of the myth of Malice: "If everyone knew there was a God or whatever, if you could see Him, there wouldn't be any question of faith. You'd be stupid not to worship the guy, if you didn't want a good smiting. But if he's just a rumor -- then you really have to believe. Heart and soul. Otherwise, you're wasting your time. The mystery is what gives it its power, you know?"

One of the things I like about Wooding's work is that they are standalones; plot fully resolved. It's also one of the things I hate; Alaizabel Cray's world is one I'd like to return to. So when I got to the end of Malice and saw there was going to be a sequel, I was both pleased and frustrated. On the one hand, yes, this plot wraps up nicely; on the other, we have to wait to find out answers. What is Malice? How was it created? Why are comic books luring teens to this strange dangerous world? Who is Tall Jake? What about the artist, Grendel?

* My favorite is The Haunting of Alaizabel Cray, followed by Poison, followed by Storm Thief. I won't know where Malice fits into this until I've read the whole series.

I liked this one, too.

I didn't think it was nearly as strong as Alaizabel, but it was still fun and dark and rather exciting.

And I LOVE that the bumpy plastic cover is removable!

I have not read any of these, but I must say the cover art is amazing, very eye capturing. I will definitely have to try these