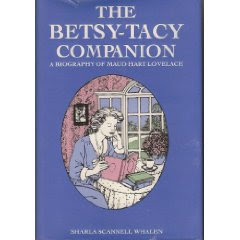 The Betsy-Tacy Companion: A Biography of Maud Hart Lovelace

Oh, fans, I love you. Especially when you create labors of love that almost defy common sense. It's tough enough explaining blogging to other people -- imagine years spent on researching the "truth" behind a (then out of print) series of children's books?

What does a fan who loves Betsy-Tacy do? They know its based on Maud Hart Lovelace's real life; but they know it's also fiction. Don't you want to know what is real? What isn't? What happened to the real life Betsy (Maud Hart Lovelace), Tacy (Frances "Bick" Kenney Kirch), and Tib (Marjorie "Midge" Gerlach Harris)?

Whalen did more than wonder; she put together what is obviously a labor of love, best read with a Betsy-Tacy book in front of you. This has page by page comparisons; maps; blueprints; photographs. It's great for a Betsy-Tacy fan; but it's also interesting for writers, to see how a writer developed and the mix of fiction and fact that made up her story. Finally, while to read it without Betsy-Tacy knowledge would be confusing as hell, it is a look at turn of the century life.

Here is the simple test of whether you'd like the book. Whalen discusses, in great detail, what Christmas ornaments the young Betsy bought during certain years, comparing references in the books. At the end of this, she writes: "If I have to explain why it is so amusing to analyze such trivia, you shouldn't be reading this book."

Any biographer of Lovelace is hindered by one fact: Lovelace burnt her childhood diaries. Whalen, defending Lovelace's actions: "As she herself said, the diaries 'were full of boys, boys, boys.' Did Maud want to go down in history as the author with the silliest diaries?"

What I found most intriguing was the background for Betsy's Wedding. Betsy marries in 1914 and it ends in 1917, when Joe is about to go to war. In "real life," Maud met and married her "Joe," Delos Lovelace, in 1917. All the "married Betsy" stuff is true -- just shifted by several years. As a matter of fact, almost all of Betsy's Wedding is based on post 1917 events. For example, remember my minirant about "OMG all peoples must be married"? Well, in point of fact, Maud married in 1917, when she was 25, and was one of the first of her group of friends to marry. So was all that "OMG you'll be too old if you wait and earn your own money" done a bit tongue in cheek, I wonder?

Also interesting were editorial choices including not mentioning some people to not overwhelm the reader with a cast of characters and omitting some "grittier" details, such as older sister "Julia" encountering a rat during her transatlantic voyage and the cockroaches and mice "Julia" encountered in her NYC apartment.

Nonfiction Monday round up is at Wendie's Wanderings (who will be at the Kidlit Conference! Woo hoo!)

I read this book a long time ago, but unfortunately do not remember much about it. And even worse I can't seem to get my hands on a copy. I'm so bummed. I found your blog a week or two ago while browsing Betsy-Tacy related sites. It's always fun to find someone else who loves the books.

I thought I'd mention, in case you're interested -- I'm hosting a Maud Hart Lovelace Reading Challenge over at my blog in honor of the reprinting of the high school years.

You can check it out by going to: http://libraryhospital.blogspot.com/2009/09/maud-hart-lovelace-reading-challenge.html

Thanks for the link! I also have to check out the Facebook page.

The new books have pulled some of the applicable chapters from the Companion and put them in as backmatter. It's so great to have the book there, and the real story at the end, with photos.

Liz, what great fun! And so enticing: I ordered my own copy of the Companion about a month ago. It's sitting here on my end table beckoning to me...but I'm on a Laurie Halse Anderson kick and was saving BTC for when I finish. You've whetted my appetite all the more. :)

I grew up reading the Betsy-Tacy books. I checked them out of the library many times, and longed to be a writer like Betsy. I even wanted to nail a cardboard cigar box on the limb of a tree I often climbed, but my parents pointed out that the rain would ruin it. I didn't realize that the cigar boxes of Bety's childhood were made of wood.

The books spoke to me of family love, warmth, and acceptance. Who wouldn't want friends like Tacy and Tib, or sisters like Julia and Margaret?

Finding the books in paperback in the 1980's was like a dream come true. I was a graduate student far from home, working all sorts of odd jobs. Rediscovering the Rays was like coming home.

The "Betsy-Tacy Companion" was great, as I could finally see all the people and places in Maud's books. I was very lucky to purchase a discarded library copy at a used book sale.

I just finished Emily of Deep Valley...and loved it. MHL is a favorite author, though I have not read the BTC yet. I want to, but can't imagine spending $50 on it.