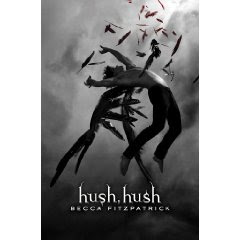 The Plot: Nora Grey's entire life shifts when her biology teacher switches the seating chart, moving her best friend Vee to the other side of the room and instead putting new student, Patch Cipriano, in the seat next to her.

From that moment on, nothing is the same; nothing can be trusted. Not Patch, that's for sure. Not her best friend, Vee, who is hanging out with two boys, Elliot and Jules, that Nora doesn't trust no matter how cute (and rich) they are. Nora cannot even trust her own feelings or memories. Is what she is feeling for Patch real? Why are so many odd things happening in her life? Why does Vee see nothing wrong in Elliot and Jules' odd behaviour? And who is Patch?

The Good: You know, I dislike spoilers as much as the next person. But considering the COVER of Hush, Hush shows a man losing his wings; considering the first chapter is set in the Loire Valley, France, 1565, and involves a young man named Chauncey Duc Langeais who is mind-controlled by a fallen angel; and, well... It's very hard for me not to just SAY IT.

OK. There is a character in this book who is a fallen angel. If you consider that a spoiler, for the love of Mike, don't watch the video about this book at the publisher's website.

I loved the dynamics between Patch and Nora. Nora is pretty self assured, and from the start Patch just gets under her skin. And annoys her. So, of course, we know she is falling for him. But Holy Hannah, who wouldn't? Here is Nora's first meeting Patch: "His black eyes sliced into me, and the corners of his mouth tilted up. My heart fumbled a beat and in that pause, a feeling of gloomy darkness seemed to slide like a shadow over me. It vanished in an instant, but I was still staring at him. His smile wasn't friendly. It was a smile that spelled trouble. With a promise."

Nora is drawn to Patch -- attracted yet knowing something isn't quite right. Things start to go weird; while driving her friend's car, she hits a man in a ski mask who then attacks her, destroying the car door. Yet when she takes Vee out to see the damage, the car is good as new. More incidents pile up; and it's connected somehow to Patch. But what is it? Should she fear him? Or trust him?

Obviously, a fallen angel is involved. So there is danger. But who is it Nora needs to fear? Is it those who are new in her life, or those who she has always known?

If you like a quick resolution and people finding out things right away? Be prepared. Fitzpatrick makes us wait 250 pages (!250!) before Nora figures out what is going on. Before that, it's 250 pages of flirtation/ frustration/ action/ danger/ flirtation/ hotness. Because of the structure of the book (the prologue) the reader is one step ahead of Nora, in that the reader knows something supernatural is going on. Nora, however, doesn't have the benefit of cover or prologue knowledge so she resists the idea that something odd -- something not normal -- is happening in her life. But once Nora begins to put the pieces together and starts to believe the unbelievable -- it's another 70 pages (again, with hotness, flirtation, heat, and action) until "the reveal" takes place and the truth is learned (not THAT kind of action. Jeesh. Take your mind OUT of the gutter, Hush, Hush manages to be hot with just glances, touches, wanting....)

As I said, there is also action; things happen, it's not all Nora and Patch trading heated looks. There is also humor; or at least things I thought were funny. Here is Nora, introducing her protective mother to the hot-looking obviously bad-boy Patch: "'This is Patch,' I said, racking my brain for something that would bring the pleasantries to an abrupt halt. But the only things I could think of were screaming Fire! or faking a seizure. Somehow, both seemed more humiliating than braving a conversation between Patch and my mom."

Along with that is language studded with clues or references to what is going on: gloom is described as resembling "escaped and wandering spirits." Which, it turns out, also describes fallen angels. And then there is another quote that I cannot say here because it will be a spoiler. Um, I guess it may be safe to say someone gives someone else the nickname of Angel.

Fitzpatrick has a great website up, including the story behind writing Hush Hush. Be warned; there be spoilers. But it's a fascinating look at the process.

I've been seeing this book everywhere this week and I can't wait to read it.
Great review, did you see the publicity stunt they did in the UK for it http://www.oneandother.co.uk/participants/LydiaAngel
very cool.