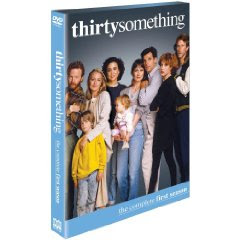 thirtysomething was a show about, well, nothing. And everything. It was about life -- friendships, career, children. Small choices, big events. Running a business; losing and finding love; figuring out how to have balance in life. And doing so not with family. Melissa and Michael are cousins; but aside from that, family is not a priority. What is the priority is the family these group of friends have created amongst themselves. Even then, the first season shows that it was not always a group; Nancy is simply "Elliot's wife," at first Ellyn isn't really friendly with "Michael's friends," Melissa and Gary.

Standalone episodes are combined with longer season and series arcs. From the start, Nancy talks of writing a children's book; Michael and Elliot's business struggles; Michael talks of writing yet doesn't act on it; Elliot is interested in film; Hope and Michael try to find a way to have an Interfaith marriage. The friends fight as drastically and bitterly as family, and reconcile just as family does.

Is this dated? I think the idea of finding ones way, of seeking balance is still current; and the challenges, dreams and hopes of this group (who would now be fiftysomething!) are the same today. So what if no one has a cell phone and computers are a big scary machine? So what if a tattoo is a big deal? Today, an airplane and terrorist joke would not be made; someone dating their boss, a professor dating students, wouldn't be so accepted.

What isn't dated? The method of storytelling, unwinding, including various people. Using fantasies and flashbacks and multiple points of view still work and the people are still real. The little touches -- people wearing a favorite sweater, houses in constant stages of repair, recurring characters and jokes -- work.

I'm looking forward to the other seasons; to Miles Drentell (hey, did he ever refer to these people in Once and Again

?); to Susannah coming and not being friends; to Nancy's blossoming; Melissa's successes. Even the death.

Now, the Hope Question. I guess you either love her or hate her. OK, hate is strong. And I don't want to get into other seasons. But Hope, well, she's tough. When her mother visits, we find it's the first time her parents have visited since the baby was born, yet Hope is pissy about the visit. She and her mother are in constant conflict; yet later, we find out the parents helped Hope and Michael with a downpayment for the house. Actually, most of the people on this show don't get along with their parents, are still rebelling against their parents, struggle to not define themselves through their parents' eyes. (Watching this thinking that Mad Men

are the parents of this generation is interesting!)

And Michael; Ken Olin's performance is memorable. Who else could have made Michael sexy and attractive, yet insecure and jealous? Olin is fearless as he exposes every weakness of Michael. Yet, Michael never turns into a whiner, a complainer. As I think about the nuances in Olin's performance, I realize part of the problem with Hope is that she is beautiful -- and that Mel Harris isn't as strong an actress, so with that depth lacking Hope came across as shrill rather than searching. Judgmental rather than strong.

The other two standout performances are Melanie Mayron, showing a believable mix of insecurity and confidence, as Melissa, the talented photographer who struggles to grow so that she stops picking the wrong men and Patricia Wittig as Nancy. Yes, its the future seasons that really give Wittig a chance to shine (I still remember, word for word, the scene where she fears dying when her daughter is too young). Wittig portrays Nancy as trapped in a role she didn't want, distanced from her husband, unsure of what to do, having lost who she once was and never realizing, until now, that her life isn't what she thought it was or what she hoped it would be. Slowly realizing she cannot blame others for her own choices. In lesser hands, Nancy could have been shrill, pathetic, clingy -- in other words, seen only as Elliot sees her -- but we see her depth, her possibility, her own struggles.

I enjoyed the many DVD extras, including glimpses into how the stories came about. They wanted to give someone cancer -- who would it be? At some point, almost every actor on the show ended up directing; some went on to careers that are now more directing than acting, and they credit this show with encouraging that type of creativity. There is also some interesting "history of TV" stuff, including the show's use of music (which held up the release of the DVD) which most viewers would think isn't a lot. But at the time, it was. Also -- for those of you who watched this in syndication? You've been missing seven minutes. In the twenty years since thirtysomething aired, we've lost seven minutes of TV shows to ads.

Great review, Liz. I look forward to getting the DVD. I can remember SO many conversations about thirtysomething at my old job. A few of us would endlessly (and happily) analyze the episodes.

I can hardly wait to purchase this series on DVD. Being thirtysomething myself now I feel like I will really appreciate and be able to relate to this series.

I loved watching the show as a teenager, and reading your review brought me right back to what I loved! I so agree about Nancy--she really developed as a character. The episodes where she struggled to figure out how to stay strong with cancer and be the same mom she had been really stuck with me. If only "My So-Called Life" could have run as long as this show!

I have never seen a single episode of this, but I would like to watch it at some point!

To everything you said: Yeah. :)