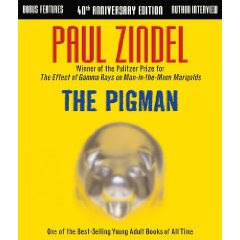 The Plot: High school sophomores John and Lorraine are best friends and opposites. John is an attention-seeking smart aleck who acts like he doesn't care about anything; Lorraine is quiet, with few friends, always analyzing but also always wanting to make sure she keeps John's respect and friendship by being up for anything and always willing to laugh at the world. Crank-calling "the pigman," Mr. Pignati is one of those jokes pushed to far. Yet it develops into an unlikely friendship, until John and Lorraine take things one step too far.

The Good: Can you believe I didn't read this book as a teenager?

The Pigman is over 40 years old; so how does it hold up? And let me say, thumbs up for the new cover. John smokes, the kids drink; it's rather amazing how easily both John and Lorraine buy cigarettes and liquor. The only cultural references that seemed really dated had to do with telephones; not only are there no cell phones, but there's a classmate whose family does not own a phone.

John is a mix of bravado and insecurity; he could fit into any classroom today. Same for quiet, book smart Lorraine; tho today's teens are probably more aware of the psych terms she throws out than the original readers were.

The parents are both dated and not; John is the traditional family with the businessman father who pushes his son and a mother who just seems to take a step back. She has no job or identity other than mother, part of which arises from the 1968 date and part from John only seeing what he wants to see. By the end of the book, despite John's self-imposed jadedness, we see a couple who had a surprise child late in life and recently faced a scary health crisis. Meanwhile, Lorraine is being raised by a single mother who can barely make ends meet and who is so concerned for her daughter's safety she tries to monitor her every step. If The Pigman were written today, no doubt we'd see more of the parents stories; its rather refreshing that this book lets teens be teens, concerned more with their own lives than their parents, with only small steps taken in seeing their parents as individuals.

It was refreshing to see how wonderfully thoughtless and self-involved John and Lorraine are about their actions, not only in how they impact the Pigman but also how they affect each other. Part of this story is about how the reader sees more, and learns more, than either John or Lorraine do about how interconnected we are and how actions have consequences.

I listened on audio, which was fab. It's part of the reason why I don't think the book is dated, and why kids will still like it. John's and Lorraine's voices are spot-on, with each relating one chapter. You feel John's snark, hear Lorraine's self doubt and hesitation, fall into agreement with them that if they have an empty house, why not have a party with a few friends? So I would say, invest in the new cover and the audio; and use the 1968 copyright date for book discussions about how things from 1968 (the phones, the parents) impact the broader story. And, when you're done, read The Pigman essay in Lizzie Skurnick's Shelf Discovery, because those essays are best read when you know the book.

Email ThisBlogThis!Share to TwitterShare to FacebookShare to Pinterest
Labels: audiobooks, realistic, reviews, someone dies, YA

I loved that book when I was a teen.

I've always loved this book - I read it first as an adult and was amazed, and have enjoyed frequent re-readings ever since. John and Lorraine are believable and sympathetic, despite their self-centerness. Isn't it remarkable that you can use the word "refreshing" about a 40-year-old book, and have that be the exactly right word for the book in question? I'll be looking for the audiobook - thanks for sharing the fact that it's available.

Zindel wrote a memoir called The Pigman and Me that I always recommend to people who liked The Pigman.

The snark and the self-doubt stood out to me on this recent read, as much as the socioeconomic thread did. And now I need to go hunt down the Skurnick essay.

I have to say -- I read the rereleased edition of this one, and the Q&A in the back with Zindel DID give me pause. As anyone who has read the book knows, the kids swear, but it's astricked. The Q&A asked Zindel how he felt about swearing in more contemporary YA and his response essentially say literary novels don't do it. Made me scratch my head a bit. Is Zindel saying a literary novels don't use swear words? That teens shouldn't be teens? Hmm.

Kelly, since he died in 2003, the interview is at least 9 years old and I think would have to be read within the context of when the interview as given. I don't have a physical copy of the book to double check that.

That's a fair and valid point (um, and obviously I knew it was an old interview), but it made me wonder what he WOULD think about it at this point. Because the big tipping point in YA lit hit after he died (what, 2005 or so maybe?) it's an interesting comment to consider seeing how much the literature itself has sort of evolved.

I am reading this novel with my 8th grade students at the moment. John and Lorraine are characters that my students are easily relating with. My students are of various reading levels and it is a good fit for all of their different levels.