The Sweet Life of Stella Madison 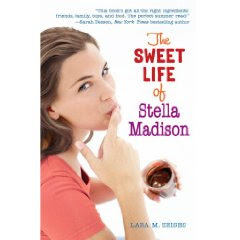 The Sweet Life of Stella Madison

The Plot: Stella Madison is the 17 year old daughter of foodies; and not just any foodies. Her father is a world famous French chef; her mother owns and runs the "Open Kitchen" restaurant. Stella's idea of fab food? Burger King. Kraft Mac'n'cheese. Yet somehow, she's gotten herself a gig at the local paper, reviewing restaurants. Luckily, Jeremy, the new (and cute!) intern at her mom's restaurant is there to help her out. (Did I mention cute? And older? And flirtatious?) But what about world's best boyfriend, Max? Oh, yeah. Maybe life isn't so sweet.

You could hear the pain in her parents' voices from Stella not inheriting their tastes. But at the same time, they have a good enough sense of humor -- or at least her Mom does -- to laugh at the idea of Stella writing about restaurants. It's nice how Zeises has her cake and eats it, too. The young foodies who read this will swoon (as I did) over the menus from the guest chefs at Open Kitchen; the fast food crowd will grimace with Stella and look forward to the hot dogs. Parents like Laura will say "please God, not my child. My child will love blue cheese."

Of course, there is more to food than meets the eye. Turns out, Mom and Dad, while not divorced, have been separated for six years. And that Dad, as the dedicated chef and wine lover, leaves every year for four months of traveling, tasting, and drinking in France and not once has brought Stella. Suddenly, Stella's rejection of what her parents center their lives around makes a whole lot more sense.

Now, onto Stella, Max (the boyfriend) and Jeremy (the intern). This is a great triangle for a couple of reasons. First, don't you hate triangles where one guy is so obviously wrong that the girl looks stupid? That doesn't happen here. Second, don't you hate how complex emotions are looked at in a simplistic way? Again, not happening here. Stella may call herself "boy obsessed" but quite simply she is attracted to two very different guys at the same time. There is no simple "Team Max" or "Team Jeremy" (That said, I'll let you know in the comments what Team I'm on). In the real world, attractions can be complicated and messy. And also fun and flirty.

Stella works through her issues -- with parents, food, and boys -- in a tightly plotted book that (not counting epilogue) covers just a few weeks. Several things are going on in Stella's life and the three story lines intertwine and balance each other. This book is a tidy 228 pages; it is so refreshing, after several-hundred-page megabooks, to have a return to a book whose length won't scare readers away.

You know, I have to take something back. Stella doesn't have issues with food -- she has issues with not liking the same food her parents do. No food issues here -- which brings us to another great about both Stella, and Zeises for writing Stella. She's not size two. She's described as normal and healthy; cute ("criminally cute", actually); both boys like her; and at one point, Stella mentions the size of a shirt she wants as being either an 8 and 10. She talks about cute clothes and two piece bathing suits. Thank you, thank you, thank you for a book about a girl who really is a normal size, and eats normally, and her size and eating and diet is never an issue. Because that size? Despite what magazines and tv shows tell us? THAT is normal and healthy and cute.

For the grown ups: guess what? Open Kitchen is real! Or kind of. Due to my mad Google skillz (and Zeises's author's note) I found Celebrity Kitchens in Wilmington, Delaware. Which is basically the Open Kitchen model: famous guest chefs cook in front of the audience, sharing their specialties. It's only two hours from my house; maybe it's doable on a Saturday...

I'd also like to point out something about Zeises. You know how it's all about the online tie-ins for book? Zeises did that years ago. No, really; in 2004, she had a blog for the character of Lucy Doyle from Contents Under Pressure

. Five years ago, Zeises realized and used the power of the Internets to promote her books.

And, also? Sometimes I'm slow. It took my to page 194 to realize that Zeises was pulling a L'Engle/Dessen by referring to characters from other books. I KNOW. Isn't that awesome?

More awesome; Zeises is fairly blunt about the business aspect of YA at her blog. If you believe authors write to express creativity and don't, you know, pay bills or have vet bills for sick dogs, don't read it. She also shares recipes (because, like Stella's parents, she's a foody).

The Open Kitchen/Celebrity Kitchens concept is awesome--and one that Lara has been interested in for a while, since I went to a book release party for Contents Under Pressure that she held at Celebrity Kitchens. And it was awesome, so if you ever want to take in the wonders that are the First State, just let me know. :-)

This one sounds great! I loved your review. I'll be adding it to my wish list. I love foodie books and I'm glad this one has more to offer than just the "I want to be a chef/I like food" plotline.

I'm adding this book to my to-read list. I love books that allow me to combine my two favorite subjects: reading and cooking.

Thanks for the review.

Such a good book, with a great leading character - I LOVE that she never had issues with food/eating or her body, and that she was a normal size, and healthy. Totally worth celebrating.