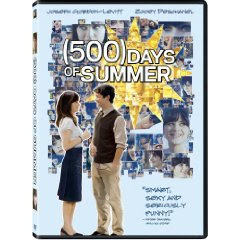 The Plot: The relationship of Tom and Summer, two twentysomethings. He believes in love at first sight and finding your one true love; she, in being friends and that there is no such thing as love.

The Good: Tom's and Summer's relationship is modern (he the romantic, she the cynic); their story has highs and lows, sweet romance and deep hurts. It is primarily Tom's story, his friends, his family, his dreams. Summer is the girl he falls for, more complex than he understands. When he is happy, his world is a music video; sad, and its raining outside and all is dull and gray. (500) Days of Summer is a beautifully written and acted look at the life cycle of a relationship.

While the story of Tom and Summer alone would make an interesting film, what ups the greatness of this is it is told out of order. First meeting, post-breakup, flirtation, first kiss, a series of disjointed days that seem at first glance to be confusing. It works: the different scenes show a building story arc, the contradictory behaviour of people, and, somehow, despite the nonlinear story telling, character development. I've watched it a few times now, and each time have enjoyed it more and more.

There is a little bit of the Manic Pixie Dream Girl to Summer, in that at first we are told that everyone loves her. She works in an ice cream store, sales go up; she rents an apartment, she gets a break in rent. And, of course, she's cute, listens to interesting music, wears great clothes. Ultimately, Summer is not such a girl. She may be Tom's dream girl, yes, in the sense that Tom falls in love with her at first sight and becomes a bit obsessed with her. Summer is honest from the start of their relationship that she doesn't want a relationship, isn't looking for love, and wants to be "just friends." Tom's own passions, own desires, cloud his thinking and he ignores her. His ignoring who she is (and isn't) doesn't turn her into a MPDG. All Summer teaches Tom is what any relationship teaches a person: people are people and cannot be made into what they are not. Along the way, Tom takes ownership of his life instead of drifting and waiting for "the one". Reading this article by the screenwriter makes me think that Summer was originally written as a MPDG (reading that article creates intense dislike in the pity party the screenwriter throws himself), and was saved by a good director, editing, and great actors.

Final point: I just adore Joseph Gordon-Levitt and his work. Between this and Brick, I think I'd watch him read the phone book and he would make it smart and sexy.

It's been fascinating to see the various ways in which people I know have read this movie. A number of my friends (all of them female, but I don't know if the split would be gendered across the board) have read this the relationship between Summer and Tom as being about Tom learning how relationships (and people) work - Summer is honest from the beginning about what she is not offering and he persists in refusing to hear her until she has committed to another man. This was (roughly) how I first saw it as well, and beyond wishing Summer had been more fleshed out I really enjoyed the film.

And then I realised that a few (male, but see caveat above) people I knew had instead interpreted the movie as being about Tom's broken heart after he was dumped by a fascinating but callous woman who clearly owed him something for being such a Nice Guy. And when I read more about the screenwriter I began to think that that was what he intended all along. I was not impressed.

Luckily, as you said, most people involved in the project seem to have gotten it right. I'm sticking with my interpretation (and I love J G-L too!)

We just watched this movie a few weeks ago. I enjoyed it, and thought it had sort of a literary story-telling feel, BUT it drove me a little crazy. I'd get mad at Summer for leading him on, and then I'd get mad at Tom because she was pretty straight-up with him.

I loved reading this review. I didn't know about the MPDG, but that was interesting -- and I couldn't figure out who Tom was (the actor), so thanks for the aha moment!

Since I am a bit of cynic myself about love, I think I might like reading about someone else who feels this way.

Aishwarya, Oh, one of my pet peeves is "I'm a Nice Guy". I'm so glad that JGL did not play this role that way (IMHO). That said, I have to say I did an eyeroll at the "falls in love with beautiful woman" thingee because sigh, where does it leave the rest of us really average people? Maybe if Nice Guys weren't only interested in the Summers of the world (and weren't so passive agressive in their so-called Niceness.....). Oh. I'm ranting. Excuse me.

Jennifer S., I hear you about love/hate! I actually took notes about days things happened on my third watch-thru to try to figure out if Tom was always deluding himself or if Summer was sending mixed messages. In the end, I think they were two different people who were attractive, had good times and bad times, and sometimes a relationship just doesn't work out and you cannot control how another person feels.

Since that's my take, the writer's take NOT being this icks me out. Yay for directors and actors.

Jan, let me know if you watch the movie!

I adored this movie and loved what it said about relationships...I'm glad it showed Tom meeting another Ms. could-be-right so his story isn't about just being crushed by the cute but honest girl. Love your take on the drama!

PR, I liked how it showed Tom with someone new, too. And I liked that Summer only semi-inspired him to pursue his dream. I mean, she did push him and was honest about it, but (per my watching) the breakup and aftermath made Tom take charge of his life because he wanted to, not because a Magic Pixie Dream Girl "inspired" him to be his true self.

I like this movie a lot, it reminds me of someone. Good.. Good..