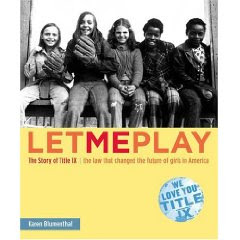 Let Me Play: The Story of Title IX: The Law That Changed the Future of Girls in America

by Karen Blumenthal. Atheneum, an imprint of Simon & Schuster. 2005. Copy from library.

Originally appeared at the Edge of the Forest.

I'm not a sports girl. Yet here I am, reviewing a book about sport.

Before 1972, the opportunity for girls to play sports, especially organized sports in school, was extremely limited. Donna de Varona, an Olympic medal winner in 1964, did not have the ability to pursue her sport into college because of the lack of university level swimming programs or scholarships.

Title IX was passed in 1972, prohibiting sex discrimination in education. That one law changed everything, resulting in today's society, where the idea that a girl wouldn't be playing soccer or able to go college on a sports scholarship is unheard of. How did that become possible? Let Me Play is a fascinating look at a cultural shift in how society views girls and sports, from girl as observer to girl as participant.

What fascinated me was not so much the sports and the athletes. Rather, it was that this book made the Law come alive. I used to be a lawyer; I didn't leave the Law. I left the lifestyle of the lawyer. The Law was, and remains, exciting, dynamic, living, breathing, sometimes misused, and often misunderstood. I love that in Law, as in literature, words have meaning. Words are important. Words change lives. Not since Schoolhouse Rocks' "I'm Just A Bill" has the legislative process been shown to be so exciting and alive.

What is Title IX, anyway? Who fought to make it happen? How did they decide on what to include, and what those words meant? And after it was made into a law – what did that mean to schools? If a football team is bringing in $5 million in revenue compared to a girls softball teams' $100,000, is it really discrimination to say that the football team gets better funding and support and uniforms? (For the record, I made up that example.)

Laws aren't stagnant; they are living, growing, evolving things. In Let Me Play, what is important is how those laws get made, and how those laws get enforced, and how a regular person, who isn't even thinking about that law, or even knows about it, is affected. This is a great "behind the scenes" look at how laws are made, and how politicians work. I'm not sure if Let Me Play… will influence any one to play soccer or basketball, although I'm sure it will make them appreciate the opportunity to do so if they wish. But I do think it may make someone fall for the Law and the Political Process, to realize that changes can be made and to want to make those changes.

My husband's family are all sports nuts - so much so that family reunions are organized as epic weekend-long sporting events and my sister-in-law is pursuing a career as a professional golfer. While I don't share their passion for sports, it's interesting to hear them, especially the women, talk about how sports have changed. My husband's grandmother played a version of basketball in gym class where everyone was stationary - and now her granddaughter has a sporting career! It's amazing how Title IX has changed things.

I LOVED this book. Pretty much every girl I knew played a sport at least in elementary school, and most of us continued playing something through high school. The inclusion of the number of girls participating in sports at the top of each chapter sold me on this book. I had a great conversation with my mother about how things changed as a result of reading this.

I have it on my summer reading list, but it never gets checked out. I keep giving it one more year.