Bodies From the Ash 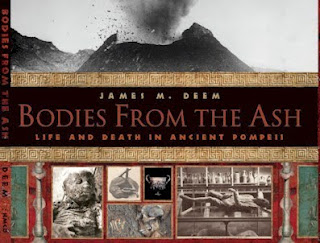 Bodies From the Ash: Life and Death in Ancient Pompeii

by James M. Deem. Houghton Mifflin Books for Children. 2005. I believe I bought my own copy. Review originally appeared at The Edge of the Forest.

Photos! Maps! Original sources! Multiple Subjects! Do history books get better than this?

Bodies From the Ash contains many stories. Pompeii: a Roman city during the early days of the Empire. It's also Pompeii: the volcanic eruption of Mt. Vesuvius that buried a city and its people. And Pompeii: the science behind the bodies. And Pompeii: the evolution of archaeology from treasure hunting to science. Finally, Pompeii: the preservation and storage of artifacts.

One of the things that I have always loved about history is the ability to glimpse a different world. Because of the quick destruction of Pompeii, and the way the city was buried, Pompeii provides a unique look into the past. Because Pompeii was covered with dust, ash, gas, and stone, when the bodies of the dead decayed a space was left; when a space is found, plaster is poured in, resulting in detailed plaster casts. We can look on the faces of people who lived more than a thousand years ago. And the buildings were also preserved: we can see their homes, the graffiti on the walls; look at the possessions they chose to take when they tried to flee. Bodies from the Ash is about this history; but

it also is about how the first people who realized the ancient city and its treasures were still intact dug holes not to discover the past but to get jewelry and statues. Afterwards came the realization that the plaster process could be done, and that what was below the surface was more valuable than jewels.

All of these stories weave together into one narrative about life and death in Ancient Pompeii. This isn't about history that is dead and buried in the past; it's about history that is alive. It's alive in the unexcavated areas of the ancient city; in the ongoing pursuit to both explore the city and preserve what has been found; and in the still active nearby volcano. And it's photos! I could sit all day just looking at the photos and the maps, planning an imaginary trip to Pompeii to see the excavations for myself.

Kathy B. at forwordsbooks said...

This books sounds great, I am adding it to my ever growing list. Having been to Pompeii, I can assure you it is well worth the trip. All the pictures and story books in the world cannot prepare you for seeing the plaster casts of the bodies - both human and animal. Plus, the living spaces that have been unearthed with the painted walls and the eating utensils set out...it is freakish. You feel as though you are going back in time to the day the volcano erupted. Thanks for the review!

I am going to Pompeii in the summer. I think this could be a valuable resource!

Agreed w/Kathy--having recently been to Pompeii and Herculaneum for the first time, it is absolutely mind-blowing. This book sounds like an excellent resource (and travel guide!).