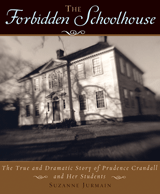 The Forbidden Schoolhouse: The True and Dramatic Story of Prudence Crandall and Her Students

by Suzanne Jurmain. Houghton Mifflin Books for Children. 2005. Personal copy. Review originally appeared at The Edge of the Forest.

Prudence Crandall was smart and a hard worker. She went to school, taught, saved, and then opened her own school for girls. One day a teenage girl approached her with a simple request: she wanted to learn so that she could teach. Would Miss Crandall admit her to the school?

Isn't that what every teacher wants, students eager to learn? Asking to come to school?

Except that Sarah Harris, the girl asking the question, is African-American. And the year is 1831. The town is Canterbury, Connecticut.

The Forbidden Schoolhouse is the account of how Sarah Harris's quest for education, so that she could teach others, led Prudence Crandall to open a school for African American girls and how the townspeople, the town, and the state, conspired to prevent the school from opening, and then to try to shut the school down. It is also an account of Crandall becoming a political activist, because before Sarah Harris asked her fateful question, Crandall was not active in the abolitionist movement.

One of the hardest things to do in works of history is to convey the point of view that existed in a different time. Jurmain presents the world of the 1830s, including the economic, legal and physical risks that Crandall took when she decided to open her school for African American girls. She also shows the courage of the students and what they were willing to put up with, in the pursuit of education. It is eye opening to the modern reader: the drive for education, and the prejudices that existed in the slave-free North.

The Forbidden Schoolhouse reads like an exciting work of historical fiction; yet it is all real. Jurmain does an excellent job with pacing, with keeping the reader on the edge of their seat with what will happen next. How far will the town and state go in wanting to shut down the school? How far is Crandall willing to go to keep it open? Jurmain includes detailed Appendices, letting the reader know "what happened next" to all the main people.

Another think I liked about The Forbidden Schoolhouse is that while it appears to be the story how one woman tried to change the world, Jurmain shows that it was much more than that. Crandall was one woman: but many people helped her, from the leading abolitionists of the day to the African American parents who were willing to pay the school fees and send their daughters to the school to the girls who went – and stayed – despite the abuse heaped on them by the townspeople who didn't want them in their town. And it also redefines what "to change the world" means: is it to open the school? To keep the school open no matter what? To bring an issue to the public? Does it matter whether the change takes place when you want it to, or 60 years later?

A great companion to this book is Elizabeth Alexander's and Marilyn Nelson's Miss Crandall's School for Young Ladies and Little Misses of Color.

OOh, kudos to both books. I love reading good creative nonfiction like this; somehow, a purely historical fiction story on this topic would maybe not have as much punch.

Monica, thanks for the recommendation. Another book for my TBR pile!