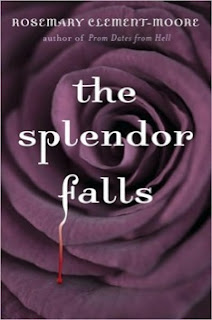 The Plot: Sylvie Davis's dreams of a ballet career ended when she broke her leg during a performance. While her mother is away on her honeymoon, Sylvie gets sent to stay with Aunt Paula, a relative she's never met, to stay at the family home in Alabama, a place she's never been.

Sylvie Davis discovers that the Davis family has roots in Alabama. An old, large home. A history going back generations. People who think they know her because she is a Davis. There are even stories of ghosts: a running girl, a Confederate Colonel. Sylvie thinks they are just stories, until strange things start happening to her and around her.

Who is she? Who can she trust? What is going on? Is she going mad, or is magic real?

The Good: You know all those Barbara Michaels

books you go looking for? Young girl, old family home, dueling love interests, with the three s's: setting, suspense, supernatural? And when they're done, you wonder what to read next?

The Splendor Falls. Pick it up and enjoy every delicious page. A worthy heir to traditional Gothic Supernatural Suspense tales.

Sylvie's father's home town is fictitious, but it is by a real ghost town that is used in the story, Old Cahawba, Alabama. Another place I've read about in a book that I now want to visit!

I love the whole discovering family storyline. Sylvie's father, now dead, left home and never looked back. While there are various reasons given for his move to Manhattan, Sylvie considers that one reason may be the dense family history, including the legacy of slavery. Sylvie, because of the distance of growing up in Manhattan, is ignorant of her family history so does not feel overly romantic towards it. Which is why her semi-visions, the cold spots in the hallway, the unexpected smell of lilacs seems so strange.

There is a love triangle, between Sylvie, Shawn Maddox (the Maddoxes and Davises are the two oldest families in town) and Rhys Griffith, a Welsh student staying at her Aunt Paula's almost-open Bed & Breakfast. Sylvie feels drawn to both Shawn and Rhys. Love triangles in romance books (especially Gothic romances) are standard, expected, welcomed. Who is the real nice guy? Who has a secret agenda? Why does Sylvie feel drawn to both Shawn and Rhys?

Also good? Sylvie's lost dreams. A person who pursues one dream has that dream taken away. Now what? A new location, new people helps her open up to new possibilities.

I liked this WAY more than I thought I would. I went out and read as many of her books as I could get my hands on; Hell Week I think was also a Cybs choice - or Prom Dates from Hell. The woman can write, and sheesh, spooky.

I have this book on my shelf to be read...I need to get to it! It sounds awesome, thanks for the review!

I just loaned my ARC copy from ALA to one of my teens who wasn't sure if she'd like this one. She ended up reading it in two days and loved it! After her rave review and yours I think I'll have to move it up in the TBR pile.

Ooooh I like this one! Thanks for the review!

I just finished reading this one (thanks to a loan from Tanita!)--VERY fun. Enjoyed it a lot more than I would have expected simply from a plot description--the woman can write, and as I found in Prom Dates from Hell, she can be funny, too.

I loved it because it reminded me of books like Barbara Michaels with the romance & supernatural & belief in old magic and religions. I hope you all enjoy it, too!