by Ally Carter. Final book in The Gallagher Girls series (and oh, how it pains me to say that.) Disney Hyperion. 2013. Personal copy.

Previously, in The Gallagher Girls: 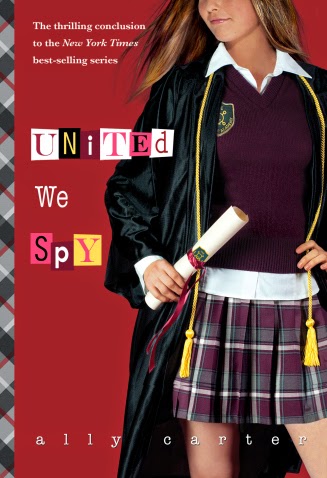 In I’d Tell You I Love You, But Then I’d Have To Kill You, Cammie Morgan had to balance boyfriend and school. Not too simple when you're at the local snooty private boarding school and he's a townie; when your mom is the headmistress; and, oh, yes, when the Gallagher Academy for Exceptional Young Women is actually a school for super spies.

Cross My Heart and Hope to Spy introduced a new layer to Cammie’s world: boy spies from the Blackthorne Institute including a maddening, heart pounding, annoying, (and so cute!) Zach. Cammie and friends prevent a kidnapping in Don’t Judge a Girl by Her Cover.

More secrets about the Gallagher Academy, Blackthorne, spies, family and friends are uncovered in Only the Good Spy Young. Cammie believes she has to figure out what's happening on her own, and has to deal with that aftermath, in Out of Sight, Out of Time.

The Plot: United We Spy is Cammie's final year in school, and the final book in the series.

The Good: The previous book, Out of Sight, Out of Time, was intense. Cammie was recovering from amnesia following a kidnapping, as well as dealing with the aftermath of having run away.

Long story short: the entire series has been about Cammie and her friends uncovering and fighting the mysterious and old secret society, the Circle of Cavan. All that comes to a head in the final book. Cammie also has to figure out what graduation will mean, for her -- what will her next step be? Will she remain in the world of intrigue and spies, and what exactly does that mean?

This series is best read in order, because it builds on previous books in terms of plot and character development. And while I'm sad to see the series end, because I love these young women, I love this world, I love Ally Carter's writing, I know that there are a good number of readers who like their series complete. (The cool new term for this, from what I understand, is "binge reading," like binge TV watching, where you can power through the whole thing at one go.)

I refuse to give away any more details -- you need to read and discover that by yourself.

Just know this: I have invested my own money and shelf space in making sure I own each book, in hardcover.

And now, some United We Spy quotes -- because I just love the writing.

"Cambridge is nice. It could use some better locks, though." Said as Cammie & friends are breaking in. For reasons.

"The first rule of running, Sir Walter," I told him. "Never go anyplace familiar." I remain half-convinced that reading these books (as well as watching The Americans) means that I, too, could be a successful spy.

"The jump didn't kill us. At least, my first thought was that we hadn't died. But I didn't let myself get too cocky about the situation. After all, we might have been off the mountain, but we were anything but out of the woods."

"Spies aren't like normal people. No one expects us to have houses and mortgages, tire swings and barbecues on the Fourth of July. But every spy is somebody's child."

"Women of the Gallagher Academy, who comes here?" "We are the sisters of Gillian."