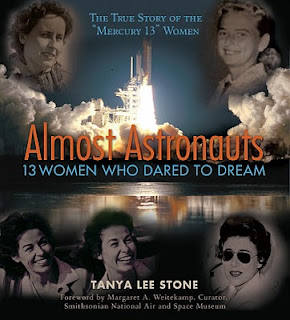 About: In the early 1960s, as the Space Program was proceeding with the Mercury 7 astronauts, a handful of people asked "why not included women in the astronaut program?" Beginning with Jerrie Cobb, a top female pilot, a total of thirteen women went through preliminary testing conducted by Dr. W.R. Lovelace. This was not part of any official NASA program. Lovelace ran the privately-funded program. Attempts to make the program official -- or to include women in the space program as astronauts -- failed. The first American woman astronaut would be Sally Ride in 1983; the first American woman astronaut who was also a pilot would be Eileen Collins in 1995, over thirty years after the "Mercury 13" attempted to show they, too, had the "right stuff."

The Good: Stone is passionate about this story, and Susan Ericksen, the narrator, brings that passion to life. Listening to Ericksen is like attending a lecture by someone who loves a subject and wants to share that love with the world.

The audio does not have any of the photographs in the book; it does have a bonus CD with photographs and references and bibliography. The audio works extremely well all by itself, in part because of Ericksen's spirited delivery; but it's nice to have the bonus of photos and the full list of works cited. I do want to get my hands on the actual book, to see the other pictures I missed. But, if I didn't know about the pictures would I think something was lacking in the book? No.

This is a nonfiction book with an opinion, and not just an opinion that is being voiced. It's an opinion that wants to be persuasive. It's not so much about the women who underwent the testing; it's more about prejudice and institutional sexism. The intended reader of this book was born after both Ride and Collins went into space. To an adult (and particularly an adult whose school photo books had "what I want to be when I grow up" with "boy jobs" such as "astronaut" and "girl jobs" such as "teacher" or "mother"), that sexism is so understood and expected that every now and then I thought, "c'mon, how can you not know that?" I had to remind myself that today's teens don't know what it is to be told no, they can't do something based on sex; or to have the rules be made in such a way as to exclude them from participation.

Some specific data and comparisons are omitted to prove a point (or, at least are not in the audio version). For example, some of these women had more hours flying than the Mercury 7 astronauts. Great. But what type of flying? What planes were the women flying versus the men, and under what conditions? While I know that part of the problem becomes that women didn't have the options to fly what and where the men flew, still, there is a difference between flying a jet and flying a smaller plane; flying in the United States and flying in a war zone. Because part of Stone's agenda is to get the reader to understand that unfairness, these differences are glossed over. Her passion and zeal is necessary to prove a point. Some readers will like this approach; other's won't.

The School Library Journal Heavy Medal blog is discussing this book with the question, Accuracy or Agenda? My flip yet serious response to that is "if I agree with it, it's accurate; if I don't, it's your agenda." People tend not to question the agenda if it is an agenda they share. In terms of factual accuracy, its helpful to look at The Mercury 13: Setting the Record Straight by James Oberg. Oberg was not writing in response to this book; but in response to some of the sources Stone uses. I had the benefit of reading this before reading Stone's book. I think Stone is clear that it was not a NASA program, but I can see how a quick read of the book could give the impression that it was either a NASA program or done with some knowledge of NASA.

The opinion and point of view goes beyond the outrage over the sexism of the past. It includes "getting into people's heads," and attributing emotions and motives to people who weren't interviewed for the book. Jerrie Cobb is the heroine of the book; and her internal life (and that of the other women) is shared because of the author interviews. Two of the key players are dead: Jackie Cochran died in 1980; Dr. Lovelace in 1965. The motives attributed to, say, Jackie Cochran may be what Dr. Lovelace or Jerrie Cobb believed, or what the author believes, but (at least from my listening to the audiobook version) there wasn't documented confirmation of what Cochran was thinking and why she spoke against the program at a Congressional Hearing. This is a drawback to an audiobook; I didn't see a footnote, couldn't flip to the back to check what a source for a statement was.

Almost Astronauts is on the short list for the YALSA Award for Excellence in Nonfiction for Adults. It's refreshing to read a book that has such a firm, enthusiastic, unapologetic point of view. It's also a gutsy way to tell the book because not everyone is going to like that position taking with their nonfiction. Some just won't like it; others won't like it because they don't agree with that position. I see value in both writing well and writing persuasively and this is a great example of both. I was also blown away with the research that was done and how Stone was able to take a huge cast of characters and a complex series of events and put it together in a way that tells a story, explains the historical context, and always keeps clear who is who (even when some people share the same first name -- and last name!)

I'll admit, I read this and got really fired up about it (you have to give her credit for that), especially because of my background in astronomy. However, I never noticed or even thought about some of the less accurate details. I wouldn't have even worried about whether or not it was NASA or what she might have left out if I hadn't read the Mock Newbery blog.

Is it even more embarrassing to admit I'm a librarian? :) Thanks for keeping me on my toes and questioning!

I'd have to pull down the book to double check several specifics but I do recall that Jerrie Cobb held the altitude record, period - not just for women. Part of the flight time issue though is that yes, most of the guys likely had combat time - but women could not get combat time. So they would have been excluded on the basis of something they could have done but were denied the opportunity to do. However it is noted that many of the women ferried heavy aircraft during the war and that is certainly not light aircraft time. (In other words these were not Cessna 152 pilots going up against F-14 pilots.) And further, they passed the tests - and usually did better and that ought to count for something.

I thought the book was great but wished that a simple appendix had been included with the women's names, licenses they held and dates acquired and flight time held (and type) before acceptance to the program. That would have cleared it all up and I hope it is in future editions.

Also, recall that the whole jet pilot requirement was in not so much for women but to keep African American men out (namely the heroic Tuskegee Airmen). And this is pointed out in the book.

She has an agenda here but as the history is SOOOO overlooked and has been ignored for so long, I think the agenda is warranted.

As for the bits on Jackie Cochran, based on what I've read in other books about her, I believe them 100%.

Melissa, the whole NASA thing, I thought it was clear, but maybe because I knew? So that's why then I put down that a quick read could perhaps confuse it. Not that Stone was being confusing. I think this is a good book not just for what its about, but as an example of persuasive writing. I think it would be fun to have students look at some of the questions and ask themselves when and how information is included and presented.

Colleen, that type of Appendix sounds great! I had hoped for that in the bonus CD. I really wanted those types of details, just to know. Stone sets up the inherent, legalized sexism (ie, some states and rules about car renting) which made me want to know, for each of these women, what their story was that they did not just sit back and go with the status quo.

I would have liked to read more about Lovelace and what his motivation was. Was he really trying to introduce women into the program, or was he just trying to prove a point?

Having read this closely after Claudette Colvin, I was also struck by the apparent lack of a organization to back up what was trying to be done. It seemed more like invidivuals, sometimes working together, as opposed to a group with a strategy or plan.

I wonder if the NASA confusion might just lie in the fact that folks come into the book expecting space = NASA and not realizing that especially back then there were a lot of other agencies (and the military - remember this was all cold war) involved. It was clear to me that it wasn't all NASA - I don't now how much more obvious she needed to be. (In other words, it's not the author's fault if she points something out in the text but common reader expectation causes a lot of them to miss it.)

Colleen, definately not the authors fault if they've stated x and the reader skims and doesn't realize it.

Melissa, good point that it doesn't matter for the book or the reader.

Surely it is reasonable to try to guess what the intended audience will make of it? If a sixth grader is going to read it and misunderstand than yes, I do think the author is to blame.

Anon, when I spoke about readers I meant intended reades. Will an intended reader misundertand? Only if they aren't paying attention. The author isn't to blame for a hurried read or a skim reading.

I'm reading this right now, and to me it's very clear that it's not a NASA program. Like you, I would've liked to know more about Lovelace and his motivations. There are source notes at the back of the book, but no footnotes.