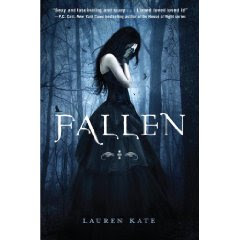 The Plot: Luce Price, 17, has been sent to the Sword & Cross reform school following an unexplained incident at her old boarding school that left a seventeen year old boy burned to death. At the Sword & Cross, she meets Daniel Grigori, and there is attraction and something more. Daniel's attitude towards her is frosty at best, leaving her to obsess and wonder but also to have the free time to flirt with just as handsome Cam.

Being at reform school, trying to figure out who is a friend and who isn't, is hard enough but there is also the matter of the shadows. Luce has seen threatening shadows since she was little, when talking about them meant visits to psychiatrists and medication. So she's not going to mention that she is not only seeing them again, they've also gotten downright dangerous.

The Good: Fallen is a book full of secrets and puzzles waiting to be discovered by Luce and the reader. The Sword & Cross is an unusual reform school, and I turned the pages trying to figure out what exactly was going on with the school, its staff, and its students. This is the first of a series, and because only a fraction of my questions were answered, I look forward to the next book in the series.

Trailers and the book website let the reader (or at least the reader who has read about this book online!) in on one of the big secrets: angels, fallen angels specifically, are involved. The book jacket itself doesn't give this away.

Since you're reading this online, I'll assume the fallen angel bit isn't a terrible spoiler because, well, as I said, just check out the official website. But even with that knowledge (somehow, a fallen angel is involved...) it's still fun and suspenseful trying to guess who is and isn't an angel, and who is and isn't a good guy, and what that even means, and why are they all at this weird school, anyway? Because this is the first of a series, some questions are answered and some are not. Only a bit of the fallen angel mythology is revealed. This is to be expected. A series with this much secret supernatural mythology involved is not going to give it all up in the first book.

Luce's attraction to Daniel is sort of love/lust at first sight, with hints (thanks to the prologue) of something more being involved. Fallen also has a huge helping of "now Daniel is nice, now Daniel is mean, nice, mean, wah." Seriously, if this was the real world, the "at first glance I know he's somehow connected to me" and vaguely abusive flirt/hurt dynamics would make me go "uhg."

But here's the thing.

Those aspects of the Luce/Daniel relationship didn't matter to my reading enjoyment because clearly Fallen is not the real world. It's, well, it's sort of like another show with menacing shadows: Ghost Whisperer

. Or what I call, "stories you're not supposed to think about too hard." Never ask yourself what Melinda's in-laws think of her and what name NotDeadJim goes by while he's a doctor or why the hell she wears "look at my boobs, oops I hope they don't fall out when I run" outfits while caring for kindergartners and having to run.

So, too, with Fallen, you cannot think, "if this is a reform school with surveillance cameras all around, how come there seems to be so little supervision and so many parties? Would a school like this really have co-ed dorms? Doesn't Luce quickly forget that everyone at school has done a very.bad.thing to get there, including eye-candy Daniel and Cam? Do people really want to be buried at their old boarding school cemetery?" Also, with a series, there is always the chance that the bit which frustrates the reader ("what's with all the black clothes?") will be nicely explained in a future book.

Instead, you just have to sit back, enjoy it, and not overthink it. Just have fun with the "now there's a fire! now there's shadows! someone is mean, then they are nice, OMG, what can I trust, ooh pretty necklace, shiny, uh oh shadows, THERE'S A KNIFE."

Final note: The copyright for this book is Tinderbox Books and Lauren Kate. Yes, I'm the person who does check these things out.

Okay, I will definitely be checking out this book based on this description alone!

"now there's a fire! now there's shadows! someone is mean, then they are nice, OMG, what can I trust, ooh pretty necklace, shiny, uh oh shadows, THERE'S A KNIFE."

One of my students is reading this and offered to loan it to me -- I think I'll take her up on her offer.

Amy, that is probably the best plot synopsis I've done!

Jen, its totally Ghost Whisperer sit back, enjoy, don't overthink or you'll be sorry. Not every show is a Mad Men. But GW has just as good ratings and is much more fun to relax with at the end of a workweek!

Paige, let me know what you (and the student) think.

Don't overthink it, huh?
Yeah, the "shiny necklace, oh, shadows, Ooh, there's a KNIFE" thing, with deep questions about co-ed dorms on a reform school campus is what her writing group should have done. By the time it gets to the reader, you really can do nothing but sit back for the ride.

Snickering, in my case.

This sounds very fun but I do sometimes have a hard time with the suspension of disbelief - a reform school that sounds like a country club. Imagine a troubled teen AT a reform school picking it up. But I guess that is unlikely to happen...

I'm hesitant about this whole fallen angels trend, but I just added this one to my request list at the library after your review and a friend's recommendation. I think it's going to be awhile before I get to read it: I am 50th in line and the library only has 15 copies!