On Tuesday I went to see Jennifer Holm. There was a nice turn out, including some of Holm's relatives who are mentioned in Penny from Heaven. (Holm's RL relatives are from this area of NJ).

One of the things that impressed me is the research that Holm did for PFH. Holm uses her mother's story and stories her mother told about growing up as the inspiration for this children's book set in 1953. Who hasn't heard a relative speak of growing up and thought, that would make a good book?

Why it works so well for Holm is that Holm goes the extra step. While the inspiration is acknowledged, and the real stories used, Holm is clear that she is writing fiction. She also doesn't end her research with her relatives; Holm researched, spoke with Italian American scholars, and immersed herself in 1953 for three years.

Why does this impress me? Because it shows that Holm cared enough to get it right; and realized that recollections were not enough. Holm cared enough to listen to radio shows from the 50s so her "ear" would be in the 50s and the language spoken by her characters would reflect the 50s. She didn't say, "I know how Italian Americans are in Jersey because of my mother and my own childhood"; she made sure she got it right with research and by consulting scholars.

My friend Christine and her kids also attended; her post about it is here. Chris remembered her camera, while I did not, so thanks to Christine I have this picture of Jennifer Holm with Christine's two children (K and S, my godson (he's taller than that, but he's sliding down the tree): 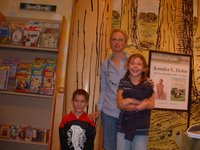 This is me getting books signed for Queen Lucy and Skater boy. I'm drinking the caramel hot apple cider (don't you love Fall!!):: 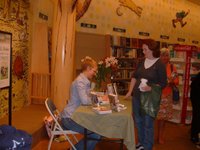 The coffee shop in my neighborhood started selling its annual hot caramel apple cider the other week, and I've been pretty much living on it. :)

I would also like to register my sinful envy that you got to see Jennifer Holm and I did not. It sounds like a wonderful event. I really, really enjoy when I get to hear authors speak. It's always one of my favorite things about attending conferences.