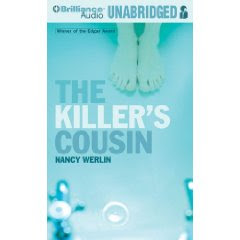 David Yaffe has moved into his Aunt Julia and Uncle Vic's house for his senior year of high school.

His second senior year. His first senior year was interrupted by the trial -- his trial. Accused of murdering his girlfriend, Emily. Acquitted.

When he moves into the attic apartment at his relatives' house, his 11 year old cousin greets him with a question about Emily's death. When David did it, when Emily died, she asks -- did he feel powerful? Was he glad?

It's not going to be an easy year.

There's a reason this book has won a ton of awards, including the 1999 Edgar Award for best Young Adult mystery. It's a suspenseful tale, with two separate mysteries going on: one, what exactly happened between David and his girlfriend, Emily?

And what is the deal with Lily, who asks such strange questions, and his Aunt and Uncle who don't talk to each other? Years before, his cousin Kathy died; are his aunt, uncle and cousin acting this way just because they are still dealing with the grief from their oldest daughter's death?

This was written ten years ago; and yes, this means there are no cell phones or blogs or twitter. But -- guess what? You don't notice. Because it's a good story (and there is no 'why didn't they call' moment.) Much is made of David's near-obsession with the show X-Files

and talking with other fans online. Guess what? All that ten years have done is made David's interest in the show a bit more odd; and that fits in with David being out of place in his new school.

The Killer's Cousin is narrated by Nick Podehl; told in first person, the narration keeps you on the edge of the seat. When Podehl voices Lily's lines, you can imagine the petulant, unhappy, demanding child. And even though I've read the story before, the tension kept mounting and I couldn't wait to hear what happened next.

I just finished this audio book and I absolutely LOVED it. You're right, I didn't even notice that the book was written ten years ago, had no idea until you just mentioned it. Great read. I wonder if the rest of Werlin's books are as good.