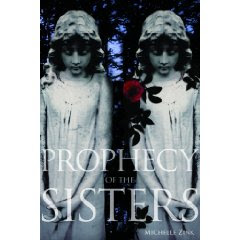 November, 1890. Lia Milthorpe has just buried her father. Her mother died years ago. They may have a big house and family money, but sixteen year old Lia, her twin sister, Alice, and their ten year old brother, Henry, are alone except for their mother's sister, Aunt Virginia.

Lia think she knows all about her family. She's about to discover secrets, deadly secrets, that go back generations. It begins with a strange marking that appears on her wrist...

A book about the supernatural without fairies spelled in weird ways. Yay!

And is this an awesome cover? Zink must have cast a spell or two to be so lucky.

Lia discovers that she and her twin sister, Alice, are part of a Prophecy; as were her mother and Aunt Virginia; and their mother and aunt; and so on, and so on. "One the Guardian, One the Gate/ One keeper of peace/ The other bartering sorcery for devotion."

Lia and Alice have never been exactly close. Lia's discovery of the Prophecy -- of one twin good, one twin bad -- explains much of Alice's recent behavior, especially after she discovers Alice late at night, alone in a room, murmuring, conducting a strange ceremony.

But things aren't what they appear to be. There is more to the Prophecy, much more. And more to the life Lia knows; she discovers friends and foes and asks questions that, for the first time, have no answers. And she learns that no matter what a Prophecy says, or the role Fate says one must play in a Prophecy, there is still choice. A person always has a choice.

Zink is skillful at building suspense, slowly revealing things to Lia and the reader. Lia begins in a rational world, and just as Lia slowly becomes convinced of the Prophecy, lost souls, and Otherworlds, so, to, is the reader convinced.

I'd forgotten how much I love a good Gothic novel. I began reading with the oddest of questions (why is this set in 1890?)* and the answer is easy -- because Zink uses and plays with so many Gothic motifs, including the Victorian era. Orphaned girls in old houses, white nightgowns, a love interest, books and libraries, faithful servants, seances, old-world myths, etc. If I were to bet (or to start looking for author interviews), I'd say that Zink did some extensive reading and research into the Gothic genre before writing this book. And I'd further bet that the things that don't appear in this book will appear in others in the series.

While Gothic novels don't have to be set in Victorian times, it adds to the creepy, vaguely disturbing feel of the book. Picturing Lia and Alice in Victorian garb makes this so much more mysterious; I'm not sure I would have been quite so concerned about Lia if she were running around in jeans and a hoodie.

Sisters of the Prophecy is clearly the first book in a series, which means that I have many, many unanswered questions. But my curiosity is not important for this book; what is important is does Zink answer the questions necessary for this book? Does this book have closure for it's primary story? Yes to both; the unanswered questions are reasons I look forward to the next book. And there is nothing more annoying than the reader who demands a book that explain everything all at once, all at up front.

*One of my odd reading quirks is questioning WHY an author sets a book in the past, whether it's 1991 or 1891.

I'm looking forward to this one...

Thank you for the kind and thoughtful review, Liz!
:D