Teaser: We Were Here 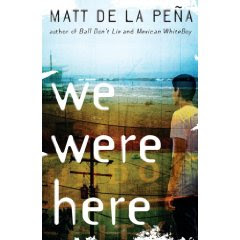 Miguel Castenada has been sentenced to a year in a group home. He was worried that he'd be put away "for a grip of years because of what I did." We Were Here starts with Miguel's time in the group home, adjusting, not talking about what he did; but after he, Rondell Law ("got two Ls at the end of the first part") and Mongo run away, this becomes a road trip book. Except instead of teens in a car, careening towards adventure with the safety net of parents, it's three teenage boys with stolen money heading to Mexico.

Miguel tells their story; and you will fall in love with him, with his voice, with his way of seeing things, by the second page. And you'll wonder, as he tells about where he is now and where he was, what happened that Miguel ended up where he did.

Teaser: A mini post about a book I've read that won't be published for several months. The full review will be posted closer to the publication date.