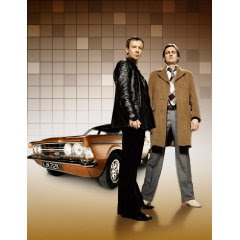 The Plot: Present day DCI Sam Tyler gets hit by a car and comes to in 1973. He's still in Manchester...but it's not the Manchester he knows.

Is he in a coma? Going crazy? Or did he really go back in time?

Tyler winds up working in the 1973 Manchester Police Department. Doing the same work; except it's all changed. No DNA, no fancy CSI-style forensics. And the rights of accused criminals? You're kidding, right? Tyler repeatedly comes into conflict with his boss, Gene Hunt. OMG is there any better character on TV than Gene Hunt? Swagger, sexist, loud, rude. But just as dedicated a cop as Tyler.

So basically this is a terrifical cop show set in the 1970s. From the POV of a modern day detective, who is often frustrated by his 1970s counterparts. With the twist of what the hell is going on that Sam is in the past and meeting his own mom?

Sam has to adjust to the different way of being a police officer; not to mention the clothes and music of the 70s. I really, really want to get Life on Mars (UK Soundtrack)

for the music. Life On Mars also did a great job with the editing; I may not know the UK 70's era police shows they were alluding to, but I got that it was being done. Same for the history; I probably didn't appreciate all of the historical things Sam was living through, but I did get that he was living through what was, to him, history.

Last point: after two seasons (UK seasons, so short for us), the show ended with a resolution and explanation of what was going on with Sam and why he was in 1973. 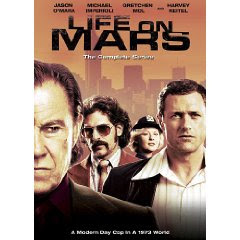 And as sometimes happens, the UK show is brought to the US: Life on Mars: The Complete Series (USA)

The US show used some different songs than the UK version, and I do hope they come out with a US CD for the show. With, hopefully, the song I am still humming: She Was the Last Planet I Kissed:

I liked both versions of this show, but have to say I LOVED the US one just because I was young and gay in NYC at that time and they did a terrific job capturing it.

I LOVE Gene Hunt...he is my big crush now and my husband thinks I am a little insane.

I haven't watched the US version yet but I think I will soon!

Have you seen Ashes to Ashes?

I loved this show (the U.S. Version). I watched it every week. :) I loved the music too. It really brought me and my dad together :)

If any of your readers would like to win a three book set of Patrick Carman's Atherton series, I am giving one away on my blog, MsYinglingReads. Thanks!

I watched the BBC America version and loved it. I was also a huge fan of the U.S. version. I was disappointed when it got canceled but I thought the resolution was very satisfying. The music was fantastic in both of them.

I've only watched one episode of Ashes to Ashes and did not find it nearly as interesting, as Mars, even with Philip Glenister continuting his role. Maybe I should have given it another chance.