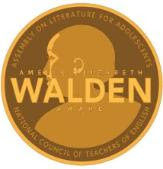 Part of the fun of going to the 2009 ALAN (Assembly on Literature for Adolescents (ALAN) of the National Council of Teachers of English (NCTE)) Workshop was being able to attend the first ever reception for the Amelia Elizabeth Walden Award.

From the ALAN press release:

The winner of the 2009 Amelia Elizabeth Walden Award is:

My Most Excellent Year: A Novel of Love, Mary Poppins, and Fenway Park

After Tupac and D Foster

Me, the Missing, and the Dead

All Amelia Elizabeth Walden Award titles will be identified by an award sticker—gold for the winner and silver for the four finalists.

This year’s winning title was announced at an open reception and reading on Monday, November 23 during the 2009 ALAN Workshop in Philadelphia, Pennsylvania. Finalists Steve Kluger (My Most Excellent Year: A Novel of Love, Mary Poppins & Fenway Park) and Jacqueline Woodson (After Tupac and D Foster) were present to read from and sign their nominated titles. Members of the 2009 committee, Jennifer Buehler, Erica Berg, and Mary Arnold, read from the remaining nominated titles.

The 2009 Amelia Elizabeth Walden Award Committee would like to thank: NCTE and the ALAN Board of Directors; all of the publishers who nominated books for consideration; Scottie Bowditch and Kimberly Lauber from Penguin Group for making arrangements for their authors to attend the reception and for supplying books for the signing; Daniel Gill for designing the beautiful award seal; Gerard Mendoza, event planner for the Philadelphia Downtown Marriot, for his assistance in planning the reception; and Don Gallo for photographing the reception.

The 2009 Amelia Elizabeth Walden Award Committee was comprised of ten members representing the university, K-12 school, and library communities who considered 232 young adult titles over the duration of the process:

For more information on the award, please visit ALAN Online: The Official Site of the Assembly on Literature for Adolescents http://www.alan-ya.org/ .

I don't think I knew about this award until I found your site. I'm thrilled that each of these authors is recognized.

I used to teach high school drama and English, and some of these stories are what keeps kids sane as they plunder and blunder through the maze of school requirements. Thanks for sharing this.

B. Lynn Goodwin
www.writeradvice.com
Author of You Want Me to Do WHAT? Journaling for Caregivers

I am thrilled to hear about these award winners, and I envy you your ALAN trip! :)

Lynn & Shannon, thanks for the comments! With something like this, I'm never sure if I'm telling people something they already know or not.

Shannon, I will be doing a longer write up but eek, so many off-blog deadlines to meet first.

Wait, wait...is that a children's book award that The Graveyard Book DIDN'T win?? ;)

Seriously, I read four out of those five and they all deserved that award in one way or another. Yays for a most excellent book.