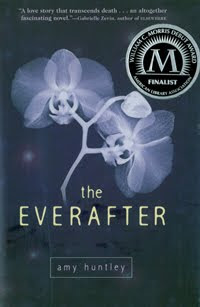 The Plot: "I'm dead." There is much she doesn't remember, not even her name. But she knows that once she was alive, with a body, and now she is dead. Objects are floating....keys. Pine cone. Bracelet. Sweatshirt. Touch the sweatshirt, and suddenly she is a place, a time, a when, a where, and finally, a name. Maddy. Madison Stanton. 17. She's dead. But why?

The Good: Each object, bracelet, keys, sweatshirt, is something that, when alive, Maddy lost. Touching the object brings Maddy back to that time, that moment, and she can relive that memory again and again and again. If, in that captured moment, alive-Maddy finds the object, the door is shut and that memory cannot be revisited.

So a ghost story. A dead girl revisiting her life story.

Maddy, revisiting a physics class: "something can be two things at once, and that observing them influences which of the two they are... Ms. Winters has moved to talking about how everything in the universe is connected in ways that can't always be seen or understood. ...at the subatomic level no time has to pass for one particle to know about and be affected by what's happening to another." Maddy's head is about to explode, and so is mine, but what Huntley has done is taken the fantastical (the afterlife, ghosts, Heaven) and wrapped it in science.

Touch an object, visit that time, and so alive-Maddy and dead-Maddy are there, both at the same time. At some point Maddy realizes she can influence the past, her life; an object may be found, a bit of reality shifted. But no matter what little difference she makes, which gives her a feeling of disquiet as she erases one memory and creates another, the end remains the same. She is Madison Stanton. She never visits a time later than age seventeen. And the way this works and intertwines, changes, being and observing -- is all explained by physics.

Madison's journey through her life is not offered in a linear fashion; she jumps in time, back and forth, and we get a scattered feel for her life and family. She is in love with Gabe, happy to be wearing his sweatshirt; then she is meeting him at her sister's wedding. Madison plays with her friend Sandra, then she is six and in Disney World, then she is eleven. She is enemies with Tammy, then friends, then the slumber party that ended their friendship. Slowly, for both Madison and the reader, the puzzle of her life, her death, her afterlife is revealed.

Huntley offers a few possibilities as to why, and how, Maddy died. While not a classic whodunit mystery, there is suspense, and Maddy is trying to find out why she lost that which is most important to us all. Life.

Inventive story telling, beautiful language, a book that gets better on rereading, a narrator whose death you mourn and dread even though you know its unavoidable; it's easy to see why this is on the Morris Award shortlist.

As an adult reading this: I am almost semi-obsessed with the mother and sister she left behind. Madison's sister gives birth the day after Maddy dies; Maddy never learns whether she had a niece or nephew. All I could think was, please, let that child be welcomed with joy and happiness, rather than haunted by the tragic death of an aunt. Let the birthdays be celebrated fully.

Very anxious to read this one...

I've been dying to read this book, too, ever since I heard the editor excitedly talk about it at our local SCBWI conference last spring (and then I found out the book is repped by Adams Literary, my new agent).

It's interesting that you mention worrying about the mom and sister forever tainted by Madison's death near her sister's baby's birthday. That happened in my family. My father was killed in an airplane crash on my little brother's 5th birthday (on December 19th even, so close to Christmas) and we've been careful always to make that day be about his birthday even as we privately mourn my father. You've written a beautiful review, and I've enjoyed your blog for probably a year now. Happy Holidays!

You know, I wasn't interested in this book-- it looked depressing, and I actively despise the name Madison for Maddy (I have a Maddie named Madeleine, which is a REAL NAME :P)-- and then I read your review. Fantastical mixed with science! Mystery! Actually, I'm still not sure I'm in the mood for it now, but I know I would have DEVOURED this book as a teen. Thanks for this review!

Like rockinlibrarian, I passed on this one because I thought it was going to be too morbid. But if you say it was one of your favorites from 2009...I may give it a second look. Thanks for the review!