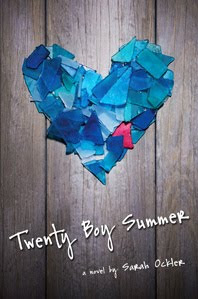 by Sarah Ockler. Little Brown. 2009. Reviewed from ARC from publisher.

The Plot: Anna and Frankie are next door neighbors, best friends since babyhood. For as long as anyone can remember, the two girls, along with Frankie's older brother, Matt, are a trio. Matt dies the summer before he was to start college. Everything changes; everyone changes.

One year later, the two girls, now sixteen, prepare for summer vacation at the beach. Frankie is now more worldly, more glittery, more stunning -- more boy crazy. It is she that comes up with the ideal summer vacation plan: if they are at the beach for twenty days, why not a boy a day? The twenty boy summer, to create a perfect vacation.

Except Anna has a secret.

The Good: Anna's secret? She and Matt were something more than friends. Anna's crush on Matt turned into something real on the night of Anna's fifteenth birthday party. Matt, afraid that Frankie would feel left out, made Anna promise to let him tell his sister and their parents that friendship had become love. Before Matt can do so, he dies.

Frankie and her family are left to grieve, a public grief of a lost son and brother. Anna's grief as girlfriend is hidden -- their relationship always a secret -- her sorrow taking second place to his family.

This is not a story about Anna's grief.

This is the story, one year later, of Anna discovering that she can fall in love again. Laugh again. And it not be a betrayal of Matt. She learns that it's not up to her to take care of Frankie. Frankie of the new sexy body, revealing bikinis, the hooking up with random hot guys.

Frankie, who lost her virginity to a foreign exchange student, both taunts and teases Anna about Anna's virgin status. But this isn't some book version of a teen sex comedy. Anna's internal struggle about her loyalty to Matt and her growing attraction to Sam, the summer boy, is respectfully portrayed. Anna and Sam are in many ways the perfect summer romance: teasing, hot, honest, lustful, fun, and any decisions Anna makes are based on what Anna wants, not what someone else pushes.

Frankie is damaged by her brother's death. Anna often thinks of the Frankie "before" and the Frankie "now" as two different people. In reality, Frankie is the same as she was, even if now she is driven by the sense that death happens and life is short so why not kiss a guy you think is cute even if you're not sure what his last name is?

Twenty Boy Summer is Anna's story, and it is warmly, wonderfully told, with humor and happiness and tears and triumph. But I ended the book wanting to know more about Frankie, still worried about her. Anna's journey is done; she loved, she lost, she found love and knows that she may fall in love again. Frankie, though -- Frankie with her searching, her quest, her pretending to be who she thinks she should be, Frankie with a loss that is deeper than Anna's -- she haunts me and I want to know more about her.

I thought it was still partially about Anna's and Frankie's grief: otherwise, why did it make me cry so much? I do agree it was about friendship and decision-making and moving on. It was one of my favorite reads of 2009 despite the tears (and despite the fact that it reminded me of that old Kristy McNichol movie, Little Darlings, I think it was called).

I think some of the grief is over the changes in their friendship, that while they are the same, they are different and that is sad. Sad that they couldn't tell each other what was going on. I thought this was one of the best books I read this year.

I really really enjoyed this book and would highly recommend it. It's not as fluffy as the title suggests, but not as serious as the back cover copy shows. A wonderful mix all around! Great job spreading the word!