Teaser: A Conspiracy of Kings 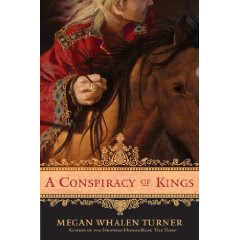 My reviews of the first three books in this sequence of titles, and yes, spoilers: The Thief, The Queen of Attolia, The King of Attolia. The spoilers are if you click to previous reviews, not what is here.

My nonspoiler teaser. Which, really, is just me telling you: these books are fabulous on every level: plotting, characterization, setting, theme, writing. I say "sequence" because I will argue until hoarse that A Conspiracy of Kings sufficiently stands alone to be considered for those prizes and awards that demand a book not be dependent on other media, including previous books. Yet, while arguing that, I would advise those who have not yet read these books that they are best read in order. It is a deeper, richer, reading experience.

Turner's sequence of books is set in a fantasy world, influenced by Greek mythology, landscapes, and history and set during a time where battles are with swords, pikes, crossbows; guns and cannon exist, but do not really rule the battlefield. Gods exist; but in an almost magical realism, in your dreams type of way. In other words, "but I don't like fantasy" doesn't really work as an excuse here -- no dragons, no spells, no Mary Sues. It's more of a historical fiction series set in an alternate Greece.

Three countries are at the forefront of these books: Sounis, Attolia, Eddis. In the first, a thief in one country (Sounis) is recruited to steal something of political importance from a second country (Attolia) to help the king of the first force the ruler of a third (Eddis) into an alliance. The second, third, and now fourth book continues to look at the politics and machinations as three independent countries compete for power and dominance while at the same time fighting against a fourth country, the Mede Empire.

Nothing in politics or war is straightforward or easy; and so, too, nothing in these books is simple or to be taken at face value. Part of the joy of the later books is trying to anticipate the intrigue, the plotting, the machinations, and Turner being such a gifted author that she is always one (or two or three) steps ahead of you.

The fourth book, A Conspiracy of Kings, comes to bookstores and libraries in April. More than enough time for you to read (or reread) the first three books.

What age group is this for? It's marketed for young adults; the first one was a Newbery Honor book. The complex story telling, full of shades of gray and no easy answers, will appeal to adults making this an ideal "crossover" title. The main characters are in their late teens, perhaps early twenties -- Turner avoids exact numbers except to point out that they are young, younger than the generals, kings, and advisors who surround them, young enough to discover truths about themselves, yet old enough to control the destinies of nations. It's a book that yes, a twelve year old will enjoy; but so will someone who is sixteen, twenty six, thirty seven, well, you get the picture. Bookstores and libraries should shelve these books in YA and in their science fiction/fantasy sections.

What else? Gen, the Thief of book one, remains my book boyfriend. Wow, do I love him. He's the perfect bad boy, with hidden depths, humor, and smarts.

Yes, I know I've said very little about A Conspiracy of Kings itself. Sophos, the heir to the king of Sounis, is a reluctant heir. He (and everyone else) knows he is not king material. Fate, circumstances -- perhaps, even, the gods -- have a way of answering prayers and arranging things they way they should be. Sophos struggles with what he wants versus what is best for Sounis versus his friendships with the rulers of Eddis and Attolia. And yes, there is Gen. And that's all I'll say... for now.

By the way? Author interview at HipWriterMama. Two more books. Giggles like a schoolgirl.

I'm not going to read the spoilery parts of this review but having seen you gush about all of these books (both here and on twitter) I'm definitely going to add them to my wishlist.

I'm reading my galley right now, trying (and failing) to force myself to slow down & savor it, but the plot is so fast-moving! I look forward to re-reading it, to seeing how everything fits together according to--I assume--Gen's master plan. A most worthy book boyfriend!

April!?! How can I wait that long? And probably longer to get here (NZ) unless I shell out for postage from Amazon. Sigh...

I got distracted halfway through the first book about a year ago. Usually, I love this genre but Gen wasn't doing it for me. I guess I should try it again when uninterrupted.

Oh, how I long for this book! I need more Turner and will definitely reread before then.

You, madam, are a booktease. Gah!

And I sympathize with the book boyfriend thing, but I'd be careful about saying that too loud. Attolia's spies will hear, and you know she won't hesitate to cut you. Or, y'know, get Teleus to do it for her.