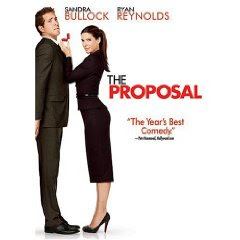 The Plot: Margaret Tate, powerful and successful NYC editor, just found out she's about to be deported to Canada because of a couple minor technicalities with her visa. What to do? Enter Andrew Paxton, her harried and put upon assistant who she bullies and blackmails into a fake-engagement to keep her in the country. The test of the fake engagement? She's meeting his folks in Alaska.

The Good: A romantic comedy that delivered everything I want in a movie. I laughed, I cringed, I rooted for Margaret and Andrew. It's got screwball comedy elements, with the whole "fake engagement" storyline; and Sandra Bullock does great physical comedy and isn't afraid to look silly or to be a mean bitca.

Margaret is a boss from hell (think The Devil Wears Prada

); Andrew is driven, wanting to move up from being assistant to an editor (I was reminded a bit of Working Girl

). At the beginning he loathes her and she is dismissive of him. But in true romantic comedy fashion, they grow to appreciate each other. Andrew stands up to her; Margaret's ice queen melts a little.

A film like this depends on the actors; Sandra Bullock and Ryan Reynolds have great chemistry. Margaret may be the devil, but it's Sandra Bullock! Bullock and the script allow the character to be strong, and good at her job; but realistically shows someone who is a little too removed and distant from people and connecting with Andrew? Not a bad thing.

Andrew, the assistant and younger man (and how cool is that, for the older woman/younger man not to be played as a joke), could come across as either weak (for letting Margaret push him around) or manipulative and mean (for bribing a job out of Margaret and then giving her a bit of a rough time at some points.) Thanks to Reynolds, from the start you see Andrew's strength and drive in pursuing his career, and he's been pushed around enough by Margaret that his pushing back makes sense.

Does this realistically show the publishing world? Who cares! Margaret has great clothes, Andrew is a cutey, and most of the movie takes place outside of New York City.

I liked this movie a lot. It was very funny and my husband even found parts to laugh about.

I liked this movie, too. Particularly the scene in the woods. Hi-larious.