Carter Finally Gets It 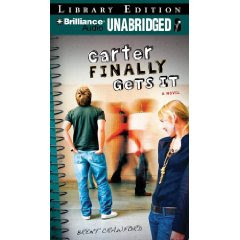 Carter Finally Gets It

The Plot: Will Carter is starting high school. It's going to be great! He'll get a girlfriend. He'll have sex. Stuttering around pretty girls (especially ones who wear shirts that show their belly buttons) may be a problem. As is his ADD, which leads him to sort of zone out. But with his older sister Lynn making sure he doesn't embarrass her and ruin her high school years he just may survive high school. Or not.

The Good: I listened to this on audio.... I have never laughed so hard. Laughed out loud. A cop followed me for five miles, convinced, I'm sure, that something was wrong with me from the laughing.

Carter, Carter, Carter. I'll admit it; I didn't like the punk at first. I almost took the CD out during the first ten minutes. He was so annoying! Talking like a kid who has watched one too many bad music videos and believed they were real, about his boys, talking about girls like they were objects and not people.

But then... something happened. I laughed at something he did (the dumbass). I cringed as he walked into a situation that I knew would not end well. And I found myself falling in love with Carter. It's a good thing I have a 45 minute commute and kept listening, or I'd have lost out on the funniest book of the year and my Favorite Books of 2009 would be one book less. The narrator, Nick Podehl, is awe-some. His reading is energetic, totally capturing every emotion -- shock, lust, disappointment, excitement, with a reading that is off the wall.

Carter's freshman year is a little bit of everything. He's a jock, on the freshman football team and JV swimming. His ADD makes it hard to concentrate, at times. He has his friends, and he cares what they think, so sometimes just goes along. But one moment he can be obnoxious as hell, and the next so sweet, like when he doesn't make a big deal out of a date throwing up. He's the tough guy who also still cries.

It's funny -- what I kept picturing as I read this book? Dazed & Confused

, for some reason -- no drugs (Carter doesn't even like to drink beer), but there is something about the kids, the sports, their parties and interactions that made me think of Dazed & Confused. And, well, a lot of other teen movies, as well as movies that are a mix of gross and funny. I was also reminded of Doing It,

except that I liked Carter much more than any of the boys in Doing It. Actually? I LOVE Carter.

I don't want to give too much away -- because part of the fun is Carter getting himself into and out of situations. So if I talk about this one great time when Carter... well. Then you'll know. You won't discover it for yourself.

The sports! I almost forgot. Carter says he doesn't care about sports, he does it for his Dad. Here's one thing: I'm never quite sure when Carter is telling the truth, or when he says what he means. I guess I'll need to wait for a sequel (there better be a sequel!) to see if he plays football next year. Because he does pretty well at football, when he pays attention. Your teens who play football or other sports? Will love this book, and the way it presents sports and competition and winning and losing.

One last thing. Yeah, Carter starts as a hound-dog, looking for sex. But this turns out to have a great romance.

So, there you have it. Sports, friendships, girls, guys, hooking up, some parties, something unexpected, driving trucks, diving, and so much more. Great for boys who will see themselves and their friends in Carter; great for girls who will finally know what their "Carter" is really thinking.

I don't think I would have picked this one up normally, but because of the humor factor you just described - it's gotta go on the list. Thanks!

I LOVED this one! Brent Crawford is writing a sequel-it'll be out April 2010 I believe. I laughed so hard during this one-I loved the audiobook and was wondering if the humor was there without the narrator, who is fantastic. But even readers who haven't listened to it and read it instead have found this one hysterical too. I gave this one to my freshman brother and he loved it too. It's a good read!

This is another book on my TBR solely because of multiple amazing blog reviews. Thanks for adding yours - I knew it was funny, but had no idea that it was laugh out loud worthy! (And thanks for the heads-up that he might annoy me in the beginning. I have little patience for annoying MCs, but I'll give Carter a chance!)