A Brief History of Montmaray 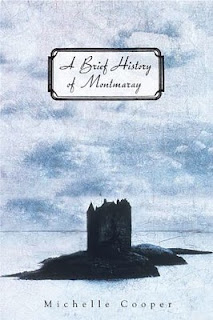 A Brief History of Montmaray

The Plot: 1936. Sophie FitzOsborne, 16, lives with her family on the small island nation of Montmaray. She's a princess, yes, but a princess who tends the chickens and helps keep the decaying castle in repair and takes care of her uncle, King John. Whatever fortune the family had is gone, but the titles remain, the island remains, the pride remains. How long can a royal family survive, when the the money is gone and royals outnumber the commoners?

The Good: Cooper spends the first part of the book casting the spell that is Montmaray. It's a time and place out of a story.

The cast of characters are slightly madcap, something out of a 1930s comedy. Her uncle, the mad King John. Cousin Toby, the heir to the kingdom, off at school in England. Cousin Veronica, smart, private, content to remain on the island. Tomboy younger sister Henry. Then there is the gruff housekeeper who bosses the children around as if she owns the place; her handsome twenty-two year old son, Simon, a solicitor in London; and the handful of villager who remain. Plus, of course, a dog. And chickens.

The FitzOsbornes (a family originally from Cornwall with ties to the Norman conquest) live in a castle, decaying and falling apart and full of leaks but also hidden passages, family crypts, forgotten Faberge eggs. An island, just big enough for castle and for the thousand or so villagers who used to live on Montmaray. As Sophie's journal slowly reveals, Montmaray is a unique country that was founded in the mid sixteenth century. Lives of past kings and queens are told, Montmaray's importance in international affairs revealed.

The FitzOsborne cousins are a small, tight, close family. They have to be. At first, the dangers are the ones they know all too well. The lack of parents: Sophie's parents are dead, Veronica's mother abandoned the family, and King John is mad. The fear of leaving the island: Aunt Charlotte, their wealthy aunt (she married well) lives in England and wants the children to be in England while they just want to be left alone. Lack of money: the decaying castle, the outgrown clothes, bad plumbing, limited food. And their own isolation, represented best in Veronica's refusal to leave the island while still hoping to see Montmaray take part in international affairs, like it did in the past.

The decaying of Montmaray and its royal family has happened for multiple reasons: deaths, the loss of villagers to the Great War and the influenza and emigration, loss of revenue from changing times, stock market loss, no strong leaders. A handful of teenagers are trying to maintain the only home they have ever known, not realizing how futile it is. It seems things only go from bad to worse; King John's declining mental facilities, Toby off at school, nothing left to sell for more money.

Montmaray was never big -- a royal family, yes; but no other important families or politicians. At the moment, there are about a half dozen commoners. It seems that at its most vibrant, there were over 1,000. Now, though...it's less than a handful of families struggling for every mouthful.

Basically, once King John led 150 Montmaray men to death in the Great War, neither he nor the island nation ever recovered and there was no one left to lead or take care of things. His wife fled the island, never looking back; Sophie's parents were killed; her aunt married a wealthy Englishman and kept away from the heartbreak and gentile poverty of Montmaray. Only a housekeeper, slightly less batty than King John, offers any adult supervision.

Why do I love this book?

Because Cooper has created a complex island history, and my trying to capture just a bit of the history and setting has turned this into such a long review.

Because the teenaged cousins, Veronica and Sophie, are trying so hard to make Montmaray work, despite their ages, their sex, their lack of any true knowledge of life outside the small island.

Because just when the reader is seduced into believing what Sophie believes -- that their island is isolated and the family alone -- that isolation is shattered by unexpected visitors. The visitors are there not only for plot (Nazis, need I say more that it cannot end well?); but also for metaphor. No matter how much anyone, Montmarayan or not, believes themselves alone, they are part of the greater world and cannot run and hide.

Because of the connection between the family and their island home. The family is clinging to each other and to an island in the sea. The importance of the country of the shores of Spain has declined, and so too has the country's wealth and the family status. They are so interconnected that to say one is metaphor diminishes the strong link between place and people.

Because you don't quite know what could be a happy ending for Sophie and her cousins; so instead Cooper gives us a realistic ending.

And so this becomes a favorite book read in 2009! And word on the street is that the author is working on a sequel. And for those of us who wonder how much of the book is real, considering Montmaray itself is made up? The author has a handy online reference guide.

I love the American cover. I am holding my breath for the sequel, gorgeous book, but it left me wanting more.

Ooh, THIS sounds like one I want to read -- the After The Cybils List is now tottering...

Ooo, I hadn't heard about the possible sequel! I read this a few weeks ago too and really enjoyed it. It's such an interesting mix of tea-in-the-kitchen family coziness and suspenseful drama.

I wish I had had time to read this one before giving it to my sister as a present!

I'm excited to get to this one in my TBR pile. I've been enjoying books with richer history and I always like great plot/characterization (who doesn't?).

I got this one for Christmas and am very excited to read it. I love how you point out the realistic ending. Refreshing.

I'm glad to see others who loved this and others who (I hope!) will love it. And wow, it does have a gorgeous cover, and I think its the type of cover that will appeal to the type of reader who will love this book.

Penni, I read that this is part of a trilogy! Squee. Except I didn't like to that interview b/c it was at a website that showed up here as black text on black background.

I wanted to compare to I CAPTURE THE CASTLE, and maybe should edit to do so, but since that is on a blurb for the book already it felt like it wasn't original enough. Also a bit WE HAVE ALWAYS LIVED IN THE CASTLE but without family being murdered. But I was afraid using that comparison would lead some to think one of the girls was a Merricat.

Angie, let me know what you think of the ending. I didn't know about the sequel until after reading it, and I felt the ending worked well as standalone. And, I'm not sure how else it could have ended.