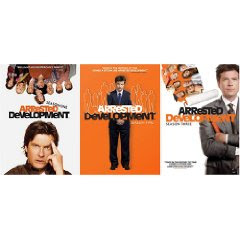 I know! This is one of those stories -- like Going Bovine -- where I heard the description, thought "too wacky for me" (ignoring all the evidence that I love wacky) and didn't watch. Then I listened to those who said I'd love it, got the DVDs thanks to Netflix, and I watched it and guess what? I DID LOVE IT.

The Plot: Wow. This is hard. It's about the Bluth family, a wonderfully dysfunctional, functional family. The father (and head of the family company) was just arrested and is in prison, good son Michael is trying to keep the family, the business, and the finances together. It's a bit hard because his family is out of control. And they are so over the top that words fail me.

The Good: Saying words fail me is a bit sad, isn't it? I mean, this entire blog is about having the words. So big brother Gob is a magician who thinks he's the best thing since sliced bread -- and somehow everyone else agrees. Even as his magic tricks fail spectacularly over and over. Younger brother Buster has been kept in the baby brother mode for so long that he's an amazingly stunted individual whose relationship with his mother involves matching outfits (and that's the healthiest part). Sister Lindsay is married to an ex-doctor, now wannabe actor and has a cynical daughter Maeby, a high school student who moonlights as a studio executive. Michael's son George Michael is in love with his cousin, Maeby.

It's zany and over the top and sometimes just doesn't make sense. But it's like a roller coaster; strap yourself in, trust in the track, let yourself go. Don't let logic ruin it.

Zany isn't enough to keep you going three seasons. Part of what helps is Michael, who looks like (and thinks he is) the Marilyn in the Munsters Family. The normal one. Except what is awesome is Michael is just as looney tunes as the rest of the family. All of them have a distorted view of themselves and their world and their place in it. While Michael sees how wrong his mother's relationship with her youngest son is, Michael and George Michael's relationship isn't much better.

And the story lines... the places this series goes. Michael dates a blind attorney and every. single. joke a person would think yet never say about a blind person? It goes there. There are no sacred cows, "oh no we cannot" in Arrested Development. People behave badly over and over. Add to it some off the wall plot lines that tie it all in together -- because OF COURSE the blind attorney that Michael is dating? Turns out to be prosecuting Michael's father! Except Michael lied about his name at the bar where he picked up the woman during an intended one-night stand. And Michael doesn't realize until the next day that the woman is blind and suddenly finds himself in a relationship (under an assumed name and made up career) because you cannot dump a blind woman! And his family finds out and realizes this is the perfect chance to sneak into her house and read the files she has on the Bluth family! And decide to do it while she's at home because, you know... blind. And all that is in one episode, with other things going on, and its amazing and beautiful and hurts from laughing so much.

And what is even better? People, plots, throwaway lines don't disappear when one episode ends. In other words? That blind attorney is going to reappear. Actually, the way things pop up again or get worked in? I think this works better in a DVD set, where you can sit back and watch several episodes in a row because that way you pick up on the little things. Waiting a week, I think you'd miss those little details. Also, because sometimes this show is so quick, and so jam packed, you want to rewatch an episode or a scene right away to get the full, rich experience.

And if you're not going to watch it? You're a CHICKEN! And I will chicken dance at you!

Nothing makes me laugh harder than to just say Bob Loblaw over and over again.

Not to mention the Bob Loblaw Law Blog.

Leslie @ This is the Refrain said...

I am sitting on my couch in my living room and I just stood up, lifted my arms in the air and said, "STEVE HOLT!" Then I read Brian's comments and said Bob Loblaw over and over again and laughed to myself.

Good thing no one was home to witness this, they might not understand ;)

I'm glad you joined this particular bandwagon, it is a good one to be on!

I missed out on this show, but my husband and I have decided to check this out from the library and watch it. We have high hopes and your review made me very excited to give it a try!

it doesn't get much better than arrested development. mitch hurwitz is a genius. it's wacky, weird and wonderful. pure, unadulterated, brilliant comedy writing. all the stars aligned for that show. not sure it's ever going to happen again on network tv.

I love love love this show. We almost named Lush Puppy after one of the characters, but it just didn't work out. So we named him after a BSG character instead! :D

I still love the old "Dick van Dyke Show" better, but there's no denying the brilliance of this one. So many great jokes, and it's so smart. You can watch an episode over and over again and still be surprised. Like in season 2 when Tobias (my favorite character) tries to join the Blue Man Group. There's blue handprints everywhere. A character you didn't even mention was Barry Zuckercorn. He's hysterical. This show is now availible instantly on "Netflix", and I watch several episodes every time I need to relax. It's so good. There's so much more I can say about this show, but there's really no room in the comments (which is why at some point I'll be devoting an entire month on my blog to this great show).

We *JUST* watched the pilot for this show!!! (I'm so glad someone else is as behind in TVland as I am!) I LOVED IT. It's completely surreal and hilarious.

GBTQ, please let me know what you think. Also? Pay attention to "next week on Arrested Development." It really isn't "next week" but it is stuff that really happens. Weird, but awesome, and just, well, watch. When I first began watching I blew it off until I realized I was missing something.

Stacy, it is so perfect!

Lush....Hm. So instead of a little Maeby, you have a little Baltar?

G1000, I havent' watched Dick Van Dyke in such a long time. Arrested Development has so many good side characters.

Also, am I the only one dying to see what Tobias's chicken dance would look like?

Ha ha! No, we have a little (well, rather big, actually, since he's a greyhound) Helo.

One warped and masterly series. Never have plotlines come round so neatly and intelligently inane.

Oh gosh, I am just sitting here remembering all my favorite scenes/lines from that series and busting up. And the chicken dance... each one so different and sooo hilarious!