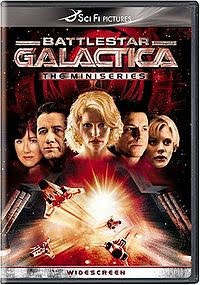 Here is the promo that convinced me to give the new Battlestar a chance:

In a nutshell, the plot: The Twelve Colonies (twelve planets) created a robot life form called Cylons, who, rather than be mindless servants, rebelled against their human creators in a violent war that ended in a truce. Forty years later the Cylons end the truce with a devastating attack on the Twelve Colonies. Less than fifty thousand humans survive in a handful of space ships; they are fleeing the Cylons and looking for a refuge and new home. Oh, and another thing? The Cylons have been evolving and inventing (or reinventing?) themselves. They now look like humans. The person next to you? Could be a Cylon. Who wants to kill you. And I have to add... because it was in the original and the sequel... the myth-planet they are looking for, as their hope and salvation and sanctuary is called... Earth.

The Good: So, right there, what more do you want? We're talking classic survivalist, people! Imagine you're on the bus to work and BAM that bus aka space ship turns out to be your new home as you're fleeing murderous skinjob Cylons. And the only clothes you have? The suit you're wearing.

From the start, what made this miniseries, and then television series, terrific was nuanced, in depth characters who made you go "wow." Forget the special effects and the "it's kinda like our world only not" setting. Forget saying "frak" instead of something else. Forget the oddly cut papers.

Instead -- the characters. Bill Adama, his estranged son Lee, gruff Tigh, suddenly President Roslyn. For example, Roslyn begins as a Secretary of Education who becomes President because no one is left. Adama is the defacto head of the military. What kind of community, what kind of government, should they have? Democracy? Military rule? What steps will these people take to ensure both the survival of civilization and of people? These were people you cheered and yelled at, wanted to hug or throw across the room.

As a viewer, you cared. While I love me my teen drama, as you can see from yesterday's entry on My So-Called Life, I also love shows with grown ups, with the cares, concerns, loves, wisdom and wrinkles of those of us in our thirties, forties, fifties, sixties.

But did the writers simply rest on interesting characters and running from the Big Bad Toaster (um, Cylons) each week? Frak, no! Each season they brought something new, something different, while still fitting in with the whole series story arc. Time passed depending not on the "next week" lets pretend this is "real time", but passed depending on what the story demanded. Need to jump a year into the future? Done.

Without ruining anything with spoilers for those of you who haven't watched this series yet, this series went to so many places. Issues of terrorism, loyalty, love, forgiveness, family. What does it mean to be human? A human looks like a Cylon looks like a human, so what is the real true difference? A Cylon who dies resurrects in a brand-new identical body with old memories. What is life, what is death?

Battlestar Galactica provided one of the most serious, respectful looks at religion and religious belief on TV. The colonists -- the humans -- worshipped many gods. The Cylons believed in one god. Belief, disbelief, atheism, faith, organized religion, all were explored in these two vastly different belief systems.

Battlestar Galactica also delivered a real ending: agree or disagree, like or dislike, BG had a plan and brought it home. No leaving things hanging or unanswered; there was a story to tell, and it was told.

Remember that "forty years before" about the creation of the Cylons and the war? The origins of Cylons, and why they were created, and how they became more than a machine, is being explored in the current Syfy series Caprica, set decades before Battlestar Galactica. The battle-weary Will Adama appears as a young boy. Man, I love well done prequels. But that is another post!

SO glad you chose BSG. Such an amazingly well-constructed show.

One of my favorite shows ever. I love the fact that everybody on the show was deeply flawed, and yet almost everyone overcame those flaws in the end. I will say that after watching the new series, I was unable to watch the original series and I loved it when it first came out.

You are so eloquent in your review of BSG, I was nodding my head at every sentence!

I became addicted to this show last fall. I rented the first season, and fell in love with the characters-so I bought all the DVDs. I am glad I didn't watch it when it was on TV, because I would have been on pins and needles for the whole series run, wondering what was going to happen next.

Yep, another excellent choice. One of the seasons in the middle (three, maybe?) got a bit draggy, but I never lot my faith in the show. It was creepy how much they could rip from the headlines and utilize for the show and not even make it seem like a stretch. Love!

Best show ever. Season 3 did have a couple of weak episodes (as did the first half of season 4), but the final batch of episodes was just stunning. I watched it entirely on DVD, and after every episode I was like, "They can't possibly top that, can they?" And they did, all the way up to the terrific finale. I've heard some great things about "The Shield" and "The Wire" (need to see both some day), but for my money nothing will ever top "Galactica". Great pick!

BSG is one of my all time favorite TV show ever! My other is The Wire. Both had huge casts of amazing characters and brilliant writing. Both dealt with political issues and both will never go out of date.