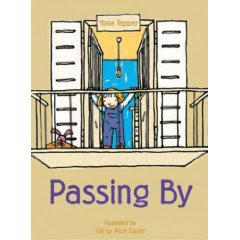 The Plot: Yael watches her neighborhood and its inhabitants. Who's far away? Who's coming closer?

The Good: Yael is on her balcony with her bunny. Instead of being isolated, she observes (and so is part of) her larger world. A dog goes by, a cat, a truck, a bicycle. Always -- some is far away, someone is coming closer, there is something new.

A beautifully illustrated book for preschoolers -- just the right balance of security (Yael at home, her mother, eventually her father coming home) with adventure (rather, the adventure she observes).

I loved Curiel's illustrations: bright, cheerful, colorful, full of life. They are also full of additional details of life on Yael's street for a reader to notice: a hat left on a bench, a child's chalk art on a wall. The jacket copy led me to Curiel's website Children in the Ghetto, an educational resource for teaching children about the Holocaust. Wow, wow, wow; it deserves its own post, and I mention it here mainly because right now I have a few balls in the air and am afraid I won't get back to tell you about it. Click thru; you won't be disappointed.