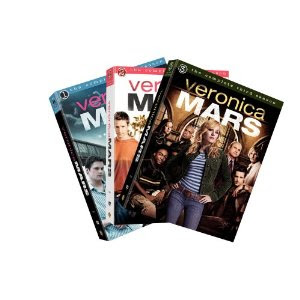 The Plot: Veronica Mars is having a rough Junior year at Neptune High School.

Last year, Veronica Mars's best friend, Lily Kane, was murdered. Veronica's father, the Sheriff, bungled the investigation and lost his job; her mother fled, never to be seen; and Veronica's friends not only deserted her, they turned on her, with the abuse culminating in Veronica being drugged at a party and raped.

But don't cry for Veronica. She picked herself up, dried those tears, cut her Alice in Wonderland long blond hair and dealt with it. Her dad is a poorly paid private investigator, helped out often by Veronica; and now that she's learned a trick or two about investigating people, she has a plan.

Find out who killed Lily Kane.

The Good: Veronica Mars may have the most perfect first season of television, ever. Even with Paris Hilton as a guest star. No, really. Rob Thomas, the former young adult author turned television producer, created this show and wow, the benefit of having someone do this who understands story, especially long term story arcs, shows.

Veronica herself is fabulously flawed yet always likable; her view of things is not always right, but it takes a while for the viewer to understand that. Pay attention to how she she labels her former friends who turned on her in the first episodes. As time and flashbacks reveal, those friends also loved and lost Lilly and truly believed that Veronica's father screwed up the investigation to find her murder. It takes time for Veronica to see that she is not the only one hurting.

Veronica's friendships and romances are not perfect but are perfectly shown, perfectly developed. She starts with "no friends," and is a rather prickly teen. Yet a few people have the patience to befriend her and in return she gives loyalty. Also? Veronica Mars has one of the best father/daughter relationships in the history of television. If I had to pick a TV dad, it would be Keith Mars. Keith, who has lost wife, house, job, place in community. Yet he picks himself up, creates a new home (in a crappy apartment complex on the bad side of town), starts working as a private investigator and most importantly, loves and supports his daughter. Always.

First season, Veronica solves the murder of Lily Kane. How she does it is beautiful; there are false leads, there are road blocks, there is doubt. Always, Veronica is smart, and driven, and kicks ass. She doesn't apologize for who she is and what she does and what she wants. She is both a terrific role model and also scary as hell. Veronica was hurt in the past, so can be slow to trust. Who can blame her, though?

Thomas, perhaps fearing this would be a one-season show, answers all the mysteries raised in the first season. Which, as a viewer? And as someone recommending that you watch this ASAP? Was terrific. However, this led to a problem -- what would be the next mystery for Veronica to solve? In addition, part of the strength of season one was the artful use of flashbacks into Veronica's life "before," before Lily was murdered. Thomas brilliantly used Veronica's past to show who she was now, and to also show the viewer that how Veronica remembered things and how others saw them were not the same. You watch Veronica Mars first to learn whodunit; you watch it next to realize that the clues were there all along.

For Season Two, Thomas killed a bus load of kids to give Veronica a mystery to solve and also brought back a few loose ends from Season One. It worked well -- Veronica sometimes is mistaken, jumps to conclusions, so to see that come back in Season Two was great. Season Three saw Veronica starting college, so having to start over, in a way. Season Three was more a number of mini-mysteries than a season-long mystery. Rumor at the time was the network didn't want a story that went the full season. For those of us who loved the show because of the mix of mystery of the week/season mystery, it was a disappointment. Also, Veronica Mars was a fabulous critique of not just High School, with the haves and have nots, but also of society, with Veronica as the outsider/observer. Moving to a university campus lost this aspect of Veronica Mars, and no replacement "bigger commentary" was offered.

Still? Season one was so. perfect., it would have been almost impossible for other seasons to live up to it. What those seasons did live up to was well plotted mysteries, Veronica remaining an interesting, flawed, driven, smart woman, some laugh out loud lines and beautiful friendships. I would have loved another season (or two or three). Personally, I believe that Veronica (and Thomas's storytelling strengths) would have been best served by fast forwarding Veronica's life by a few years. That way, skip over the awkward college years and also allow a story that requires the types of flashbacks that worked so well season one. Ah, well...there is always the rumored movie, right?

What else can I say without being too spoilery? How about two of my favorite quotes?

"Veronica Mars is smarter than me."

"Adversity is the diamond dust with which Heaven polishes its jewels."

I want Veronica's entire wardrobe. Including these boots.

In looking over past posts, I blogged a lot about Veronica Mars when it was on. There are some wee spoilers in those posts, but nothing big. Such as... OK I have to say it...

Logan Echolls is my TV boyfriend. And if that's a spoiler, so be it. I was going to embed a clip to prove it...but sigh. I don't want to give to much away.

Did you ever see the "pitch" trailer (I don't know what else to call it) of Veronica's first year in the FBI? It is an extra, if I remember correctly, in the season 3 dvd set.

Logan is *MY* TV boyfriend, Liz.

My favorite lines are:

"Today, we shall eat like the lower middle class to which we aspire."

"As I've told you three times, this is the friendly officer of the law who is going to politely overlook your underage drunkeness."

"Are you a mean killer?"

"See this face? This is my over the moon face."

Liz and Diana-I will fight you for Logan!:)

I discovered VM on DVD and loved it. It's a watch the whole thing in one weekend kind of show. I could gush all day about this show! I still get sad that it's over.

Fabulous post! I have a long, long way to go before I can review like you. I loved Veronica Mars, but the third season wasn't shown here (Australia), or if it was it must have been in a very late timeslot and I missed it.
I think I'll forever love TV that's set in highschool. My current squeeze is Vampire Diaries :)

Thank you! I've been looking for a series to watch without the boy, and I think (hope, pray) that this is the one. VM always intrigued me, but I never caught it when it was on TV. Hope my library has it!

Darsa, yes, I saw the pitch for FBI Veronica! I'm not sure if her personality would fit with the FBI. Too much her own person, not listening to other people; but I would have loved more Veronica in any way.

Diana & GreenBeanTeenQueen, "Veronica Mars is smarter than me." Sigh. It seems many of us have Logan as a tv boyfriend.

And GreenBeanTeenQueen -- yes, watching this over a few days is perfect!

Fiona, I'm watching The Vampire Diaries right now. Loving it. I also, ashamed to say, am watching The Secret Life of the American Teenager.

Natalie, I hope you enjoy!

I've been successfully convinced to watch this show and Friday Night Lights thanks to my blog reading. If only I could get to them...

I completely love this post! I simply love Veronica. I was really hanging on the potential VM movie rumors. Sadly...just rumors it seems!