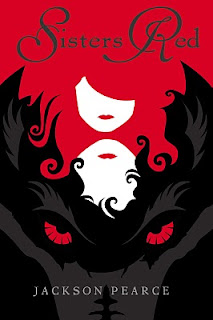 The Plot: Seven years ago, the March sisters were attacked by a Fenris -- a werewolf. It killed their grandmother and then went after Scarlett, 11, and Rosie, 9. Scarlett fought back. She lost her right eye; she is scarred from the attack; but Scarlett saved her sister.

Seven years later, Scarlett is dedicated to the hunt. Hunting the Fenris, protecting a world of people that don't even know they are hunted. Rosie, loyal to her sister, also hunts. Rosie wants something out of life . . . . Something more than fighting. What, she doesn't know because she hasn't even dared dream of another life.

Then Silas returns to town. Silas -- Scarlett's hunting partner and best friend. Silas -- the son of the man who helped raise Scarlett and Rosie after the death of their grandmother, who taught all three about the Fenris and hunting and fighting and killing. Silas. For Rosie to fall in love with Silas would betray Scarlett, in every way possible. It would mean abandoning Scarlett... it would mean taking Silas away. Scarlett sacrificed her face for Rosie; should Rosie sacrifice love in return?

This is a retelling of Little Red Riding Hood. Both Scarlett and Rosie have red names; the color red attracts werewolves; Scarlett hunts and hides her scars by wearing a red cape with a hood. Silas, like his father before him, is a woodsman. Silas's name has meaning, also; it means "man of the forest." Scarlett's and Rosie's grandmother was attacked and killed by a wolf/ Fenris.

Scarlett and Rosie, growing up, ignored the two years difference between them; ignored the two different fathers; and saw themselves as almost-twins. Rosie explains: "When we were little, Scarlett and I were utterly convinced that we'd originally been one person in our mother's belly. We believed that somehow, half of us wanted to be born and half wanted to stay. So our heart had to be broken in two so that Scarlett would be born first, and then I finally braved the outside world a few years later. It made sense, in our little pig-tailed heads -- it explained why, when we ran through grass or danced or spun in circles long enough, we would lose track of who was who and it started to feel as if there was some organic, elegant link between us, our single heart holding the same tempo and pumping the same blood. That was before the attack, though."

This duality carries throughout the entire book. Scarlett, Scar-red, whose scarred face ensures that she remains separate from the world and thus an almost perfect hunter. The only thing in her life besides the hunt is her sister, Rosie. Rosie keeps Scarlett part of the world.

Silas and Rosie's gradually growing love affair, hidden from Scarlett, is not meant to hurt Scarlett but it would destroy her. Destroy her because it would mean that Scarlett is truly alone.

I love the sister dynamic here; it is true and real. Scarlett and Rosie love each other; neither wants to hurt the other. Rosie wants freedom but also knows she owes Scarlett. Scarlett doesn't think of Rosie as owing Scarlett; rather, Scarlett sees herself and her sister as two against the Fenris, two hunters together, two saving the world. At the same time, Scarlett recognizes that Rosie could have more and both wants to protect Rosie and to have Rosie fight by her side.

Can these two sisters who share a heart each find their own way in the world? Can they be true to themselves and true to each other? This, alone, kept me turning pages and my heart racing and wanting answers and wanting to make sure that it all had a happy ending.

Of course, fighting Fenris, even with a bit of a friendship/love triangle, is just a series of random fights; more is needed to make a good story. When the Fenris change from human to Fenris, they lose their souls. A full moon isn't necessary to turn the Fenris in human form into a wolf; blood lust also can. But what is it that makes a human a Fenris? It's more than just a bite. Scarlett, Rosie and Silas realize that the Fenris are hunting a Potential, a human who -- if bitten at the right time -- will become a Fenris. What makes a human a Potential? Can these three find that Potential to save him? And by finding the Potential, can they set a trap to kill as many Fenris as possible?

Because of the love story between Rosie and Silas. Because of the terrific sister relationship between Scarlett and Rosie. Because Scarlett and Rosie are strong, capable, dangerous, lethal hunters. Because I cared so much for Scarlett, Rosie and Silas, I began to think they were real. Because the story line is smart and clever. Because the story is both original yet uses established lore. Because the writing is exciting and lyrical. For all those reasons, this is a Favorite Books Read in 2010 (see sidebar).

One final note. I got a bit mad at the author while reading this book. Something happened or didn't happen that PISSED ME OFF. And that was when I knew, this is a terrific writer. To care enough about what happens to a character that I get mad about it? Brilliant. I love that words on a page have been crafted and put together in such a way that I react as if it were real. If Pearce does not give me what I want in the companion books, I'll be busy writing fanfiction.

Oh, did I say companion books? Yeppers: Sweetly, 2011; and Fathomless. I have a few unanswered questions, about the world Jackson has created. I'm glad that there will be more books, for more answers. I suspect there will also be more questions. An endless cycle -- I'm looking forward to it!

ooo, i've been waiting so long for this one, and now i really want it!

I was on the fence on this one for some reason, but it sounds quite appealing based on this review. I'm going to add it to my wish list.

Oooh, that does sounds most excellent.

Let me know when you've read it so I can tell the bit that got me go "no no no! must have sequel to make this the way I want it to be"

Oh no, I can tell this is going to make me very sad but it sounds too compelling to ignore. My library system has three on order, happily. And maybe I will even be caught up on the TBR piles before it arrives...

Ach! I've been dying to read this one. Sounds very intriguing.

I stopped reading your review shortly after starting because I will definitely pick this one up! The premise hooked me. Ohhh, it looks so good.

I loved this book too! One of my favorite new fairy tale retellings! She's a great writer!