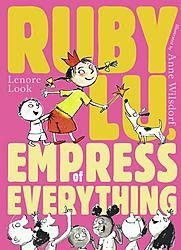 Ruby Lu is in second grade. And the best. thing. ever. has happened: "The best thing about having a cousin come from another country to live with you is everything." Flying Duck is full of wonders, from signing Chinese Sign Language to using chopsticks to pick up peas. What happens when having an immigrant cousin gets old?

A great chapter book for the younger set. Ruby's concerns revolve around what is important to an almost-8 year old: school, learning to swim, alternating between fighting with her neighbor Emma and being friends.

The immigration story of Flying Duck is in the background; there are some challenges for Ruby's family, but the problems are really in the background. Flying Duck's parents have trouble finding work, but Ruby is more concerned with learning how to swim (or, rather, avoiding learning).

Ruby's family is Chinese-American. It's woven into the story; it's not the point of the story. The point of the story is a second grader figuring out how to be a friend to her cousin, and thinking getting glasses is cool, and seeing if it is hot enough outside to fry an egg. Or a pot sticker. Or a hamburger.

Ruby is a great kid -- real, funny, adventurous except when she doesn't want to be (like swimming). Perfect for elementary schools and early readers; and also a great family read aloud.

I LOVE Ruby Lu, for all the reasons you stated. Mostly for the funny.

This was a great series to read with my 7 year old. We both laughed and loved it. Now we're reading Alvin Ho - also lots of fun!