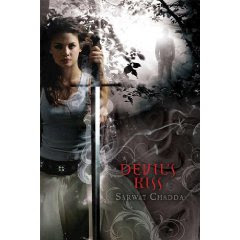 by Sarwat Chadda. Disney Hyperion Books. September 2009. Reviewed from ARC I picked up at BEA.

The Plot: Billi SanGreal has been raised to be a Knight Templar. No, it's not hundreds of years ago. It's present day London, and her father Arthur leads a small band of dedicated knights in fighting evil: vampires, werewolves, ghosts. Things are about to be kicked up a notch. No, it's not that she's being made a knight at age 15. No, it's not she actually met a cute guy, Mike, who likes her. No, it's not that her childhood best friend Kay (and kinda crush and psychic Oracle) has returned from studying in Jerusalem. Quite simply, hell is being raised and an Archangel is plotting to get in God's good grace by killing a lot of people. It's up to Billi to stop him. Or die trying.

The Good: Let's say the B word right away. Buffy. Chadda addresses this on his website in a very humorous way: "October 2004- Friend tells me to try my hand at a straight story. I bash out Templar Chapter 1. The Premise is awesome. Nobody would think to write about a teenage 'kick-ass' heroine fighting the supernatural, or mix in the utterly obscure Knights Templar... November 2004- I discover Buffy. Despair follows...."

OK, now that Buffy is out of the way.

Billi Sangreal is tough cookie because she's been raised that way. Her mother, Jamila, died when she was five; at ten, she began training to be a knight as if she were a grown man. Her father didn't pull any punches, literally, in the training she undergoes. It makes her tough, but also oddly sheltered because she's had little time to interact with her peers or to do anything for herself that is, you know, fun.

The Devil's Kiss is a nice mix of horror, adventure, angst, and history-light. The Knights Templar figure in; but there are none of those pretend-textbook paragraphs of too-much-historical-information. The "info dumps" are woven into the story; Kay's being gone for a year is an excuse to tell some, Billi's not having studied as much as the other Knights (because, hello, 15!) is another reason. It's also "light" because Chadda has been able to create his own history of what the Templars have been up to since October 13, 1307.

What else did I like? Billi's name is Bilqis; her father is British but her mother was Pakistani. Her father, a member of knights sworn to protect Christianity, marries Jamila, a Muslim, and gives his daughter an Islamic name. The other knights have names of Knights of the Round Table: Percy, Balin, Bos. I'm not sure if it's the authors' sense of humor (which is very apparent on his website and had me chuckling) or if future books will indicate there is something more to the names. And while there are some who speak with Welsh accents, there is also a knight who is African. So yes, this is a very modern mix of people. And religions. Because while the Christian roots of the Knights Templar are quite clearly spelled out, under Arthur's leadership the purpose of the knights is to fight the Unholy and he works with all religions to do so.

Yes, there is a sequel. The author's blog talks about his new book and the research and writing process. And that little run in with immigration. Those of you who don't like cliffhangers between books? Never fear! The main story was wrapped up in The Devil's Kiss.

Well, WOW, a South Asian author and a fantasy book. Those two things alone are enough to make me happy, but I love the cover, the main character's mother's name and their last name -- anything that sounds like sangria is really good -- and I'm always in favor of girl-power heroines. Biracial Pakistani British girls are even better. I'm DYING to pick this one up!

That sounds AWESOME, and I cannot wait to get my hands on a copy now.

Oh, this really sounds like fun--and since my middle name is Jamila it makes me just a little extra eager to check it out!! Thanks for pointing it out for us.

I LOVED this book! I can't wait to read it again when it comes out. I really loved that the author had Billi make some tough choices and then had her deal with the (often unexpected) and really difficult consequences. He also mixed in so much so well. Yep, a fantastic book!!

This sounds fantastic! Thanks for such a great review.