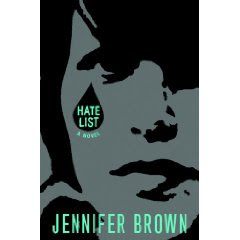 The Plot: On May 2, 2008, Valerie Leftman, a high school junior, got off the bus in a bad mood because Christy Bruter had once again tormented her on the bus and then broken her MP3 player. She complains to her boyfriend, Nick Levil, who says he'll take care of it.

Val thinks Nick is going to yell at Christy, give Christy a hard time, maybe -- just maybe-- do something more.

Val doesn't think Nick is going to pull out a gun and shoot Christy. And then turn the gun on the other kids and teachers in the High School -- people whose name appears on Val & Nick's "Hate List." Val ends up being one of people shot right before Nick turns the gun on himself.

Months later, school has begun, and Val is returning to school. And whispers. Is she a hero who stopped Nick from killing more people? Or is she a villain who helped plan the shooting?

The Good: Hate lists. Yep. Easy to say, after one has been used by a school shooter, "what a terrible, sick, horrible, mean thing done by an evil person." But c'mon...when people are picking on you? Teasing you? Bullying you? Making your life miserable? Isn't it tempting to make a list of all the people and things you hate -- all the people and things that hate you? Does that really mean you want those people dead?

Val's struggling with a lot of things, least of all is being shot in the leg. There is her part in it -- the Hate List. There is returning to school. There is her family, hardly the model of perfect family bliss before the shooting. And there is Nick.

Nick, her boyfriend. Best friend. She loved him. Loves him. How can the sweet, Shakespeare loving boy be a murderer? Yes, he was teased. Yes, he got mad. But... but... how come she didn't see this coming?

While Nick and Val are bullied, with words and fists, Brown does a great job of showing this isn't about bullying. There are a lot of unanswered questions about school shootings (and if you want answers to those questions, I suggest reading books like Columbine

.) Instead, this looks at the survivors -- the people who loved and liked the shooter. Because before he was a monster, he was a teenaged boy, with friends and a girlfriend and parents. Brown explores being that type of survivor, and what it means to reshape your life after the worst thing possible happens. Val is haunted by Nick; and I am haunted by Val.

Interesting thing about names. Nick's is "Levil" -- evil. The devil is sometimes called "Old Nick." Val's last name -- Leftman. She's been left behind. But her name, Valerie, means strength. Her brother, Frankie, is one of the more honest -- or frank -- people in the book. The principal, Angerson, does a lot to make me angry. Val's psychologist, Dr. Hieler, is a healer -- another wordplay. Christy Bruter is a "brute" to Val.

Great review of a great and I think important book. I read it several months ago, but like all books that REALLY hit me, have had a hard time being articulate enough for a review. Nice point about the names, I had thought some of that too.

Fantastic review! I have not heard of this book before, but it is definitely going on the TBR list. I have been on the waiting list for Columbine at my local library since April; I should finally be at the top of that list in the next couple of weeks. Perhaps I can read both of these books in tandem.

Ooh, this sounds like a really realistic book, in that "oh, we did that" kind of way. Eek.

Great review. I liked what you pointed out about the characters' names - I never think to look for things like that.

Oh dear, your review makes me want to read it right away, but I found the similar Jodi Picoult so disturbing!

I saw this in the library the other day but wasn't sure I'd like it. After reading your review I've changed my mind, and want to read it.

This is disturbing; but it's also good. Finding out what is going on in Valerie's head. Being open to the possibility that "evil" people, well, don't walk around in a Dick Tracy comic looking evil or with a sign over there head. yes, that exagerates.