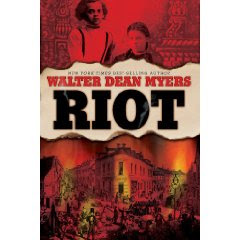 The Plot: A story of the 1863 New York Draft riots, told primarily through the eyes of Claire Johnson, 15, daughter of an Irish mother and black father.

The problem with an ARC like this is I don't have the photographs, maps, and illustrations the final copy will have and, as an armchair history lover, I want them.

The author thanks Professors Padraig OCearuill and Marion Case of NYU's Glucksman Ireland House in this book. So, while my copy lacked the various back matter, my assumptions are that the history in this can be relied on. For example? Those thinking "a white mother? and black father? in New York City in the nineteenth century? I don't think so!" can be rest assured (if they rely on Wikipedia) that New York was one of a handful of states that never had laws about marriage between the races.

Riot is balanced; it portrays and does not excuse the violence, but Myers illustrates that the roots of the anger and the violence were about racial hatred, yes, but also fed by ignorance, poverty, and social injustice.

The use of a screenplay is interesting; unlike Monster

, it's not being written by a character. It starts on the streets of present day New York, rapidly skipping back in time until July, 1863 is reached. Riot does not pretend to be written in the nineteenth century; from the first scene it's clear that this is a look at the past through present eyes, the present day unseen narrator being the screenplay writer.

The storytelling device focuses primarily on Claire, who, literally, has a foot in both worlds as the racial tension escalates into violence and she tries to figure out her place in her world. A number of other people are also introduced, covering the variety of people touched by the riots: a girl working at the Colored Orphan Asylum, soldiers, police officers, rioters, observers. The camera cuts away to these other players, always returning to Claire and how she sorts things out.

At times, the speech and action of Claire and others seems modern; but the screenplay format is a constant reminder that this isn't really historical fiction. It's often been said that historical fiction doesn't reveal as much about the historical time being presented as it does about the present. And that is what the sometimes modern thoughts or actions reminds us -- that Claire's questions about identity and race are not some long ago quaint question but are today's issues. Yes, we've elected the first black president; but look at the dialogue, still, about whether he is "black" or "white." Looking at the violence that "have nots" inflict on other "have nots" is not something safely in the past.

* True Story about how I got this ARC. Waiting for the plane to Chicago for ALA, I had a "meet up" with someone I know via Twitter, who works for Egmont, and gave me a copy. Add it to the list of "anecdotal evidence of the benefits of Twitter."

Very happy to read this. Didn't know about it.

I linked your review on our front page.

Did you know that Zetta Elliott's main character, Genna, in A Wish After Midnight travels back in time to 1863 just before the New York Draft riots?

I would like to invite you to read my new fantasy novel, "Gateway to DreamWorld." It has received rave reviews and has a shot at becoming a movie.

I'd like to second the mention of Zetta Elliott's book, as it offers such a nuanced and rich exploration of this historical period. You can find out more at her website: www.zettaelliott.com.

color online & tockla, I keep my eyes out of a copy of Elliott's book.

brenda, thanks for the recommendation!