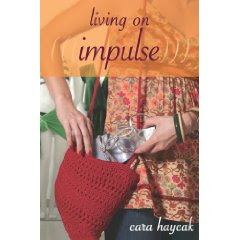 by Cara Haycak. Dutton Books, a member of Penguin. 2009. Reviewed from ARC from publisher.

The Plot: Mia Morrow, 15, is doing what she's done many times before.

Except this time, she's been caught.

The Good: Usually, the "getting caught shoplifting" is the start of the main character's redemption. Here, well, yes, Mia gets caught, is grounded by her mother, and has to get a job to pay restitution to the store.

But she still has a long slide down ahead of her, and, frankly, at times Mia's impulsiveness is not attractive. When her two friends basically dump her, they give a laundry list of what she's done in the first hundred pages (which includes shoplifting, cheating, hurting one of them during a volleyball game, joking about using prescription drugs, and sneaking into a club) and there's a part of the reader who is nodding along, especially when they sum it up: "Mia, you're a liar and a thief." Mia's response (in addition to being angry): "Maybe she didn't think through all the things that she did. But at least I do things, don't I? Mia walked even faster toward the nude beach."

Mia isn't mean; she is, as the book states, impulsive, thinking first, acting later. She doesn't mean to hurt others; yet she does, and also hurts herself. And, as the story unfolds, so, too, does the realization that she shares this trait with her mother. There is no one thing that changes Mia - or, rather, there is no one thing that inspires Mia to change herself. Instead, the reader learns more about her, her mother, her grandfather. If anything, as the external things in Mia's life spin out of her control (her grandfather is dying; her mother's hidden drinking is now out in the open), she begins to think about her own actions, the things in her life she can control. What results is a believable story about a realistic character.