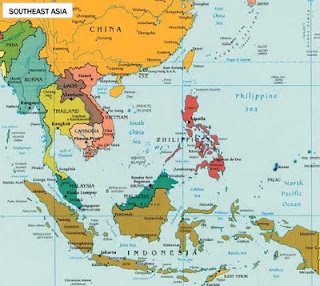 When One Shot South East Asia was proposed, my first thought was, what book to read? And my second, but I don't want to read the same book everyone else is. And did I want a book written by an American about set in that area? Or a book by an author from South East Asia?

So I thought, aha, I'll take a look at PaperTigers, and see what they have to say.

And then I thought.... hey. One purpose of the One Shot tours is not only to talk about books we love, but also to bring attention to titles and resources. So why not interview PaperTigers? Instead of talking about one book, instead highlight a resource that continually brings good books to the attention of its readers.

From PaperTigers website: PaperTigers is a website about books in English for young readers. It embraces multicultural books from or about anywhere in the world, with a particular focus on the Pacific Rim and South Asia. PaperTigers offers a wealth of book-related resources for teachers, librarians, parents and all those interested in the world of children's and young adult books. The PaperTigers website is http://www.papertigers.org/; and yes, they have a blog.

I spoke with Aline Pereira via email. Many people contribute to both the website and the blog; Pereira is the Managing Editor.

Liz B: PaperTigers is a website about multicultural books, with a particular focus on the Pacific Rim and South Asia. What was the reason behind PaperTigers and what led it to have this geographic area as its special focus?

Pereira: In 1996 Pacific Rim Voices, a nonprofit organization based in San Francisco, launched the Kiriyama Prize, a book prize whose aim was to choose outstanding books, fiction and nonfiction, that would contribute to greater understanding of and deeper empathy among the peoples and nations of the Pacific Rim, east and west, north and south. The geographical outreach of the Kiriyama Prize was later extended to include South Asia as well as the nations of the Pacific Rim (which already included the "ASEAN" countries of Southeast Asia).

A website titled WaterBridge Review gradually grew up alongside the Prize to offer interviews, book reviews etc with the same focus. Recognizing young readers as a vitally important audience when it comes to establishing a foundation for greater intercultural understanding, in 2001-2002 Pacific Rim Voices decided to launch a website that would highlight books for young readers (in English, or bilingual, with English as one of the languages) that would have the same geographical outreach as the other projects. Thus PaperTigers was created.

Some of the central ideas motivating PaperTigers were to celebrate the common humanity we all share, while also recognizing, respecting, and celebrating diverse cultures; and to help overcome stereotypes and prejudice that could diminish awareness of and respect for the humanity of "the other", whoever and wherever that "other" is.

While maintaining a particular focus on the Pacific Rim and South Asia, in 2007 PaperTigers expanded its geographical outreach to include books in English from anywhere in the world. Its aim was then, and continues to be now, to offer a service to parents, teachers, librarians and others interested in multicultural or cross-cultural books, and in encouraging and promoting reading among children and young adults.

Liz B: In the years that PaperTigers has been online, have you noticed any differences or changes in your readership or the type of information users are looking for?

Pereira: I’m happy to say that our readership has grown consistently over the past 8 years. From the beginning, our audience has been comprised mainly of librarians and teachers, but the means of our audience or potential audience to receive information have certainly expanded/changed.

In order to serve our existing audience in a new way as well as to reach new readers, in 2007 we started the PaperTigers blog. It seemed like a natural extension of the website, and a good way to keep up with the changing times. We definitely saw a spike in the number of readers/visitors since then, and judging by the feedback we get from readers (mostly still via email!) we seem to be on the right track. We have managed to expand our reach mainly by consistently adding quality content to the website and blog and staying to true to our goals.

Liz B: The recent controversy over the cover for "Liar"by Justine Larbalestier included questions of whether white readers would pick up books with a cover illustration of someone who isn't white; or, at least, whether publishers, booksellers and librarians believe this to be true. What is your response to this?

Pereira: I haven't read Liar, but having seen the book cover and read all about the controversy surrounding it–and learning about the fact that the author herself said there was never a question about the narrator's race–I find the publisher's claim of "striving for ambiguity" with the choice of cover quite appalling. I understand that publishing is a business, but if publishers aren’t willing to shed old stereotypes about race and about what readers will or will not buy based on book covers, there isn’t much hope of bringing the narratives by or about non-whites to the attention of the general public. White-washing book covers hurts book creators and readers alike––and such an approach can’t be good for business in the long run either, no matter how profitable it may prove to be short-term. I can only hope that one day, sooner than later, publishing houses big and small will realize the wealth of humanity they are missing out on by sticking to old ways and not taking some risks.

[Note from Liz B: After our interview, it was announced that the cover of Liar was being changed to reflect the narrator's race.]

Liz B: What are some of your current favorite books from the Pacific Rim and SouthEast Asia?

Pereira: I recently read Carolyn Marsden’s The Buddha’s Diamonds (Candlewick Press) and enjoyed it a lot. The book, which is aimed at 9-12 year-olds is co-written with Thay Phap Niem, a Buddhist monk whose childhood in a fishing village in Vietnam is the basis for the coming-of age story. Marsden has also written Silk Umbrellas and The Gold-Threaded Dress, which take place in Thailand and are also wonderful reads. Her work is always engaging and of the highest quality.

As for picture books, Lee & Low has just released The East-West House: Noguchi’s Childhood in Japan, written and illustrated by Christy Hale. It tells of how Isamu Noguchi’s experience of growing up biracial in Japan influenced his outlook on life and his development as a multi-faceted artist. The book is lovely and very accessible.

Liz B: Thank you so much! You can find out even more about Aline Pereira and PaperTigers as this lovely interview by Mitali Perkins.

If you're looking for other books to read, check out the resources at the PaperTigers website; add the blog's RSS to your feedreader; and, of course, check out the other One Shot South East Asia posts, rounded up by Colleen at Chasing Ray.

Ooh, some great links and book rec's. I had such trouble trying to track down stuff in general circulation in our library, but these are some encouraging finds.

Love this! I love Paper Tigers. Glad to see them featured here.

I didn't finish a book for the challenge but I plan on reading something from the SE links.

Thanks so much for featuring PaperTigers, Liz! I just checked the SE Asia round-up at Chasing Ray. There are so many great posts!

Yay for PaperTigers! I'm so glad you guys are getting the notice you so richly deserve!

Thanks for featuring Paper Tigers. I always find great books there. I've added Bhuddha's Diamonds to my library queue.

Thanks for the wonderful interview. Paper Tigers ROCKS!!

My brothers and I joined the One Shot and were having trouble finding books to read. Colleen suggested several but also sent us over to Paper Tigers to get more ideas.

It is a great resource and we found three fabulous books. Thanks for even more great info here!

Thank you for this post! I'm bookmarking Paper Tigers and will get "Buddha's Diamonds" - I had already marked Marsden's "When Heaven Fell" to read soon. I have dear family moving to Vietnam for a couple of years, and I wanted to read some books set there with my son - so glad to have this resource!