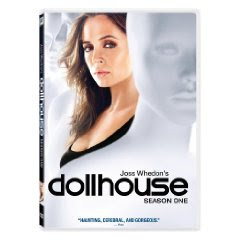 The Plot: Echo (Caroline) is a "doll" in the "dollhouse." High paying clients pay to hire a doll to be anything the client wants. This isn't acting or pretending; the "dolls" original personality has been removed, and depending on the assignment, a new personality is downloaded into the doll and the doll becomes -- the perfect girlfriend. Hostage negotiator. A singer. Whatever you want.

It's not exactly legal; so FBI Agent Paul Ballard is investigating, looking to find Caroline with only a photograph, a first name, and rumors as a lead. How far will the Dollhouse go to stop Ballard? And does the Dollhouse have any limits in what it will -- and won't -- do to fulfill a client's wishes?

The Good: As you know, I began watching this last season with some reservations. I'll address them in a bit; first, what I liked about this show.

Dollhouse works great as a "sit down and watch all 12 episodes over 4 days" TV show. In many ways, it's stronger when you can see one episode after the other, the character development, the multi-episode story arc. Each Dollhouse episode works as a standalone; but there is also a season-long question (Who is the mysterious Alpha doll who went crazy and killed or mutilated several people before escaping the Dollhouse?) and a series question (What is the Dollhouse, really?)

As a viewer, it can be a bit hard to connect with the dolls who are a different person each week, reverting to a child-like state between jobs. For this reason, perhaps, the Dollhouse staff, despite the fact that they, well, treat people like dolls, are more sympathetic -- or at least easier to know -- than the dolls. If a person changes every week, how can I get to know them? How can I like them? Despite this limitation, or maybe because of this, Enver Gjokaj (doll Victor) and Dichen Lachman (doll Sierra) give stunning performances and show an incredible range of character. You actually look forward to them being someone different each week because they bring their A game each time.

If you read my prior posts, you'll see I'm a bit pissy at Joss for saying these shows are about yadda yadda yadda. What is the Dollhouse metaphor? Is this show about feminism? About employers wanting an unquestioning workforce? About acting, with "meat puppet" actors manipulated by directors and producers and writers? I've flirted with all ideas (well, except for the feminism one. That is Joss's idea and I don't agree). Ultimately, I think its a reflection of today's world wanting only to talk; never to listen; to say they want communication and relationships, but the truth is they only want that when it's one-sided, convenient, and easy; and ultimately, to always be in control and not have to compromise.

What didn't I like? Joss's talk before hand about the show yadda yadda yadda was a bit turn off; I much prefer discovering the truths about the show by myself, not for it to be hammered at me. Also, I'm a bit tired of Joss having his cake and eating it, too. He says he is a feminist; but the amount of short skirts and skin shown actually gets tiresome. I also have an inherent distrust of a show with a built-in rewind/eraser; i.e., when in doubt, say it's programming and a doll! It gets a bit tiring knowing that nothing can truly be trusted. But please note that sometimes I do like that type of storytelling, such as with Justine Larbalestier's Liar.

DVD Extras: there are two bonus episodes. One is an epilogue, of sorts, set ten years in the future (or, at least, one possible future). I LOVED the epilogue; and truthfully? Would have loved to see more storytelling like that. The other is the pilot that was deemed not a good pilot. What's funny is that some scenes from the pilot made it into other episodes; and an actress who was featured returned in a different role for a different episode. I do admire Joss's loyalty to actors and staff and crew.

I LOVE Dollhouse, but it is a show you need to watch with a grain of salt.

I LOVE Dollhouse too! I watch anything with Eliza D. She rocks!

I'm a big Dollhouse fan ... despite the occasionally gratuitous skin (more in Season 1, I feel like, to hook the fanboys) ... but sad to say, I'm pretty certain it's being cancelled. Definitely want to check out the extra episodes!

I saw a couple episodes of this when it was first run last season then for some reason (I can't recall) I stopped watching and got so far behind I didn't pibk it back up. I did purchase the DVD and have to get to it.

I'm a fan of Joss and his loyalty so I get excited to see who he brings in to his shows that I've seen before. I'll likely be tired of the short skirts though, haha.