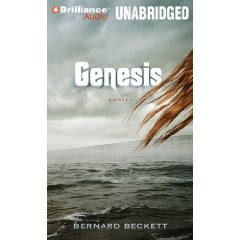 The Plot: Anax is facing an incredibly difficult examination. She wants to enter the Academy; and is now facing three examiners, in her area of choice, history. Not the far history of the 21st century and the conflict, wars, plagues; not the founding of the isolated island, the Republic, but later, as society tried to adjust to its new way of living, a new civilization. In particular, her speciality is Adam Ford. Every schoolchild knows about Ford; but Anax believes she has a new, unique viewpoint. Will the Academy accept her?

The Good: A entire book that is one character's test to get into school?

Except -- it is. Because it's a history none of us know, even though Anax knows it fully, and we are eager for each detail of her past, our future. An eccentric millionaire who knows enough to buy, populate, and control a remote island and who is called Plato! Can society really be changed by one man? And who is Adam Ford, why is he so important? Is Anax right, to see him in an entirely new light? Why does Ford's imprisonment with a robot matter?

If Anax questions the official history, is she proving herself worthy to the Academy? As we find out about the past and present, and try to figure out what is happening in this world -- discover a past where children would be killed if they weren't going to grow up the right way -- an isolated land that killed the refugees who tried to get there -- we begin to wonder, does Anax's different viewpoint put her at risk? Can she talk her way out of the danger?

Is Adam Ford a hero? A rebel? A murderer?

The entire book is Anax talking to the examiners; weaving bits of history, and her own story, together. Using original documents and holograph recreations to show her view of history. Battling anxiety and fear as the five hour examination continues.

A science fiction book that my be set in a utopia or a dystopia. It's hard to tell, as new things emerge in Anax's story. Along the way, philosophical and ethical questions are raised.

The narration is brilliant; Wright perfectly captures Anax's mix of confidence and questioning. When Anax plays back tapes, sound effects add to the overall mood.

Watchalike: because this is about Anax talking, I was reminded of My Dinner with Andre

Possible spoiler: the ending was extremely satisfying; I had my suspicions, as time went by, as to what Ford did and his impact on Anax's world. Your SF watchers and readers will be very satisfied, not only with the world Beckett creates but also the questions he raises. Also? While chock full of wonderful things, questions answered and unanswered, it is very short, just 150 pages. Short doesn't mean easy; it means concise, and each word, thought, statement matters.

I REALLY liked this one - it was such a trip. Like you said, as a reader you're so absorbed in the history and the philosophy and you're trying to really understand it so you become absolutely invested in it. Then the end happens and it's just...jarring in the most satisfying way. I wonder what reading it a second time would be like knowing the ending - better or worse? Better to pick up on the subtleties?

I might have to try listening to it on audio now, too.

I really want to read this now. I've added it to my "Books to Keep an Eye out for" list.

How would you rate it on cleanliness? Namly profanity.

I read this many months ago and it still sits in my pile of books that need to be reviewed. It was recommended to me by a fan of SF as compared to YA however it seems to have attracted the YA crowd as well. I wonder why that is honestly, not because it's a bad book I liked it very much, but because it just strikes me as odd that the YA crowd would weed it out. It was actually shelved in the SF section in my BN where I purchased it. Perhaps it's the power of the blog?

Anyway, I found this to be an interesting read as well.

Kelly, I also wonder what a reread would be like; as you said, the little things, the assumptions of the reader. I didn't want to get into the big reveal too much, because I'm the type of reader who starts guessing based on that tease (and, truth be told, had considered the reveal as a possibility, just not all the details, of course).

Enna, I wasn't reading for that (ie, language) so my best answer is, I don't remember any cursing. It does have plenty of mature themes and topics (is it right to kill refuges wholesale and protect your country?), but I don't recall any cursing.

Michelle, I believe this was published adult SF in Australia (or New Zealand?) by an adult SF author & the imprint decided to go with the YA/crossover angle here, much like was done with both TENDER MORSELS and THE BOOK THIEF.

Hi, NZ librarian here, coming in a bit late but thought I would just note - yes, Beckett is a NZ author. In my experience his books are usually found in the YA section of libraries here, probably because most of his books are YA and so anything he writes tends to get lumped in, whether they are more adult SF or otherwise. (Does that clarify or did I miss the point of your comment?!)