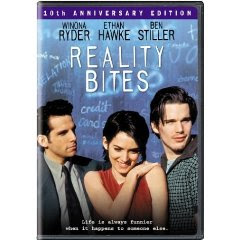 The Plot: Post-college life of Lelaina, want to be documentary film maker; her roommate, Vicki, manager at the Gap; their drop-out musician friend, Troy; Sammy, who is gay but doesn't date; and the businessman Lelaina is dating.

The Good: I have a love-hate relationship with this film. Which means, so much I adore about it; and so much I hate with a passion.

What do I love? A snapshot of a time, the early 1990s, and the slacker - grunge lifestyle. Yes, children, before hipsters and the Millennials, there was another group of entitled twentysomethings who thought they knew it all and that the world owed them. Who worked at semi-dead end jobs to pay bills.

The dialogue, full of pop culture references and an "old before our time" jadedness is perfect. I just want to sit and rerun it over and over. And the music; oh, the music. The clothes, the need a shampoo hair.

I also find it so refreshing to see people smoking and it not being a big deal. Smoking both kinds of cigarettes. The divorced parents. AIDS. Trying to figure things out.

Ethan Hawke, Ben Stiller, Janeane Garofalo all shine. Steve Zahn's storyline is too short; like they wanted a gay character but then didn't quite know what to do with him. And Winona Ryder just puzzles me.

Because the reason I cannot full-out love this movie is Lelaina, and frankly I'm not sure if it's the character as it was written, the plot, or Ryder's acting. In a nutshell, she wants to make documentary film; she's in Houston, working on a morning TV show. She ends up looking for a job, not finding anything -- but here's the thing.

We're told that Lelaina is looking for a job; we see her looking for jobs and getting told "no"; she even voices my thoughts (find a job! get a life!) but it rings false.

False because of how it ends. with Lelaina having no job, no career, no idea what she wants, no goals. Oh, she does achieve one thing, figuring out which guy she wants. Interesting enough, deleted scenes included Lelaina compromising herself by getting a job at the Gap. Including this in the movie would have changed my reaction; but what remains unanswered, what job did she actually want? If it was filmmaking, what was she doing to make the shift from hobby to career?

Lelaina has no idea what she wants or how to work for it, other than to make self-indulgent rambly films about her friends and edit them. She talks about how much she works at it, but all we see is her shooting random video, editing it (without seeing the end product), and having no plan on what to do with the product beyond getting the local morning show to use it as a guest video spot. She is angry that her parents won't pay her bills when she cannot find a  new job and scams money off her father. When her boyfriend Michael offers her the opportunity to turn her film into a product (albeit one MTV-ized), the "happy ending" is her standing up against "the man" and ending up with Troy, slacker supreme. At least Troy realizes he has to get gigs for his band.

For a post-college look at life, with jobs hard to find, bills unpaid, it's interesting, refreshing, still topical.

Even when I watched it the first time, in the theatre, the fact that this ended without Lelaina deciding anything about how she was going to pay her own bills bugged me. There's a line in a young adult book (I forget which one) about how being an adult is not about owning a car; it's about paying the bills and insurance for that car. Lelaina never gets to the point where she realizes this. It's not just a picture of slacker life; it's saying that being a slacker, living off other people, is a fine life indeed. And I don't know if Lelaina is that shallow and unformed, or if it is Ryder who is unable to capture the loss of direction post-college life. Is Lelaina supposed to be our hero? Or just the main character?

Michael -- Michael, who pays his own bills, has a job, and doesn't scam rent money off his parents -- is the fool. Michael isn't perfect -- none of these characters are. But since Lelaina is the main character, and we see her happy and kissing Troy at the end, instead of being a character study of three imperfect people, it's the story of two "cooler than you'll ever be" people and one "working for the man" outsider.

So I hate the film. Wish there was a way to not have a Hollywood ending -- I don't want anything unrealistic -- but damn. There has got to be something other than Lelaina sitting around, making self-indulgent films that have no point other than to stroke her own ego so she can call herself an "artist."

But when I can ignore the end -- ignore the message that yuppies drool, slackers are cool -- and just indulge in the pop culture talk, the sharp dialogue, Ethan Hawke's brilliant performance of someone who is truly not sure what he wants, the music, the clothes, I love this film.

And, of course, I may love this film so much because back in the day I dated the Troy character, not the Michael.

I really want to love this movie but can't because of exactly what you write here. The parts where they use the father's gas card to buy food and brag about him paying; it all just annoys me to no end.

Michelle, this was the first time in forever I watched the entire thing.

Colleen, i know what you mean. the gas card bit (and that the audience clearly was supposed to be agreeing with lelaina's brilliant idea) is something i just cannot get over. truthfully, it colored the whole thing; and it's why despite the montage of lelaina job hunting, and her "get a life" speech to troy, i just wasn't convinced that she was really taking job hunting or her life seriously.

but damn, i love the dialogue. the music. the my sharona scene. the post-college drift. and dirty haired troy.