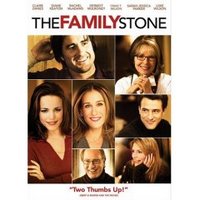 The Family Stone A fun romantic comedy that also looks at family dynamics. Eldest son Everett Stone (Dermot Mulroney) a successful businessman, brings his girlfriend, Meredith Morton (Sarah Jessica Parker) home for Christmas. His family do not like her one bit -- she's too uptight, too fussy, too cold. She talks too much. They are pretty obvious with their feelings; and Meredith ends up not only going to stay at the local inn rather than remain in the Stone family home, she also calls her sister, Julie, as emotional support. Problem is, for some reason, the family loves Julie, leaving Meredith as much an outsider as before. Soon, Everett and Julie look to be connecting emotionally; but don't feel sorry for Meredith. Because there are sparks flying between Meredith and Everett's brother, Ben (Luke Wilson).

The Good: I love these types of movies. And romantic comedies are like other things not taken "seriously" by critics, (*cough*YA and children's books*cough*) people say "oh just another romantic comedy" thinking they are all the same and easy to make. But it is not easy to make a good romantic comedy. Friends, I have seen many, many bad ones. This one? Terrific.

I would watch Sarah Jessica Parker read the phone book. She is wonderful; and I have followed her career since Square Pegs. She makes the "cold fish" very sympathetic. Meredith may put her foot in her mouth repeatedly, but SJP handles the character so that not only don't you hate her, you like her. The rest of the cast is equally amazing.

In "triangle" movies like this, an interesting phenomena takes place. When it's romantic comedy with a guaranteed happy ending, with two people dating and then the "true love" interest entering the picture, the two original daters -- even if engaged -- are never shown engaging in physical contact. Not even a kiss. It's as if they're dating in the 1950s. Here, too, tho Everett is thinking about becoming engaged to Meredith, they don't even share a kiss. Because the viewer needs to cheer the new relationship, yet not view the people as "cheaters", we are told about the existing couple but shown little about their being a couple.

What is great here is that it works for both Everett and Meredith. In Serendipity, for example, both main characters are with other people; there is no real physical interaction shown in those existing relationships. Not only that, but the original significant others are also clearly shown not to be the "right" person, to the point that that person is so annoying/ shallow that one wonders why the main characters ever got involved with them. In The Family Stone, the original person is shown not to be "right", and it's done without condemning the "other" person. It's not that Meredith isn't right; she's not right for Everett. So, while Meredith may not be the right match for Everett, there are sparks with Ben. There is no bad guy. In a way, there is no cheating.

What else did I like? Thad, the youngest brother, is hearing impaired. One of Meredith's many missteps is not handling the situation well -- she speaks loudly. All the Stone family members automatically sign as they talk; it's done in a very "this is second nature" manner, as would be true of a family with a hearing impaired family member.

One thing I like about movies is the viewer has to think for themselves, sometimes more so than when reading a book. For in a book, we are told everything; in a movie, by watching the background, dress, scene, etc., we have to come to our own conclusions. Everett starts as the perfectly groomed businessman and ends up grubby and in sweats; sister Amy gets a gift of a snow globe, that only makes sense if you noticed that she had snow globes in her bedroom.

The best thing about the movie? Luke Wilson. I think he's my new movie boyfriend. He doesn't know it yet, of course.

What I didn't like? OK, this is a pet peeve of mine, but I want to rant a little bit. (I know, I do have a lot of pet peeves.) One of the reasons for the Stone family not liking Meredith has to do with money / class; Meredith comes from money. It's not a big point; it is just one of a few lines thrown out and it really isn't followed up. Everett is shown to be a successful businessman; Amy comes home with laundry, so I figured she is starting out on a career and struggling. But based on the house that the Stones live in, even if I assume it's inherited (but that's not in the final movie version), the Stones are simply upper middle class to Meredith's upper upper middle class. Since Meredith's family home is not shown, it may be richie rich. Who knows. Point is, the Stones are shown to be so comfortable -- and Meredith never mentions money -- that it's jarring when the issue of class / money difference is mentioned. And I think it shows that Hollywood doesn't quite realize what middle class really looks like.

The movie is rated PG-13. While sex is not shown, it is talked about. Truthfully, I don't see how this would have any teen appeal; it's a movie for grown ups. And I do enjoy watching movies that show grown ups my age in romantic comedies. Love isn't just for teenagers and twentysomethings.

On a slightly unrelated note, I'm very turned off by the trailers being shown for The Break-Up. Bickering as romance dates back to Pride and Prejudice, if not earlier; and can work very well. But the scenes shown on the trailer make me feel -- uncomfortable. Too real; too nasty; and while I see the comedy, I don't see the romance. Now, if this had been talked up as War of the Roses, I would understand. The trailers are making me want to not see this movie.
at May 29, 2006

Email ThisBlogThis!Share to TwitterShare to FacebookShare to Pinterest
Labels: romance

Great post. I might disagree with you abut teens not liking romantic comedies. Here's what one of my students wrote (proud teacher moment):

That's a great list and a great article. Congrats to you & the teen!

Teens can definately enjoy chick flick movies; I posted about this movie seeming to go more towards an older audience is because I don't want people to assume that if I post about some book/movie/tv show, it's me saying "yep this is for teens".

And as I approach a certain birthday, I'm also more on the lookout for movies where I see me (agewise) on the screen. I wish Meg Ryan hadn't stopped making romantic comedies.

Oh, Square Pegs. Loved it. Sort of a precursor to My So-Called Life and Freaks and Geeks, don't you think? And possibly even to thirtysomething. Actually the 70's series "Family" (remember Buddy?) may have been the ultimate precursor.

The two writers for thirtysomething began with Family. And while Family followed a lot of the then-standard TV conventions (the thirtysomething writers said how they felt very constrained when writing for Family), it was also ahead of its time, in regards to storylines and storyarcs.