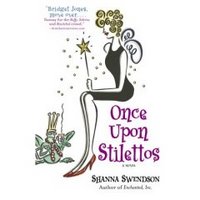 Once Upon Stilettos by Shanna Swendson

The Plot: Katie Chandler works as an executive assistant at Magic, Spells, and Illusions Inc. She's not a wizard; but she is immune to magic. Which means that she's great to have around, to see through enchantments. But then Katie begins to realize that she's not seeing what she's supposed to be seeing -- her magical immunity has disappeared. The timing couldn't be worse, as her parents (who know nothing about magic!) are visiting NYC from out of town, she's got a crush on her coworker, Owen, and the CEO (Merlin) is counting on her special abilities to find a spy.

And there's those fabulous red shoes she just bought; and like all new shoes, they put a bounce in her step and make her feel wonderful.

The Good: Have you ever wondered about the post-Hogwarts life of young witches and warlocks? Where do they go to work? How do they interact with other people? Here's your answer! In Katie's modern magical world, the magical world and non-magical world co-exist side by side, helped along by spells and enchantments so that the non-magical don't notice people with wings and gargoyles.

It's a PG rated Sex and the City in a Magic world, narrated by Bridget Jones. (yet, always original!)

This is a nice, breezy romance, combined with the fun of magic. I didn't read the first book (Enchanted Inc.), which introduced Katie & co., but this book explained enough (without over explaining.) While both books are set in the same world, with the same people, it's not the type of series that must be read in order.

I liked the mix of adventure, fun, and romance; and I loved Swendson's way with words. Katie goes to a wine dinner and listens to the wine conisiur talk about the various wines: I'm sure you noticed the lush texture and hints of passion fruit and pear. Katie's response: I hadn't noticed any of that. I pretty much just tasted wine. If it was all made out of grapes, how was it supposed to taste like passion fruit?

Katie gets inspired to investigate the company spy: I imagined myself having a burst of insight the next morning, calling a staff meeting, then outlining the evidence that led to the dramatic revelation of the culprit, just like Sherlock Holmes. Unfortunately, I seemed to be more Inspector Closeau than Sherlock Holmes. At best, I was Jessica Fletcher with a slightly better wardrobe and a lower body count among my friends and neighbors.

About those new red shoes: The salesman returned with a box, then kneld at my feet. As he slid the shiny red pump onto my foot, I knew exactly how Cinderella must have felt. I felt a surge of power, like I could take on the world and have any man I wanted. . . . Before [my mother] could stop me, and before I could change my mind, I handed my credit card over to the salesman. If I didn't eat out for a month and stayed away from the bookstore, I could probably pay the shoes off in a couple of months. By then, I was sure I'd have worn them several times and my life would have changed completely. Who hasn't felt that way about new shoes or a new outfit?

This isn't a teen book; but this is a fun read for those kids in college who grew up on Harry Potter.

Shanna's blog is the umpteenth one to mention Wives and Sisters by Natalie R. Collins, so I figure that's a sign and I just put a request in at the library. That, and I've become addicted to Big Love.
at May 07, 2006

A Totally New Concept in Magic Forums has arrived!

Introducing MAD (Magical Arts Domain, in case you were worried!) – a fun, friendly forum with an emphasis on teaching and learning…from beginner to seasoned Pro. Finally, somewhere where dedicated newcomers to Magic, both young or old, can come and learn the hottest effects and related magical skills without fear of being continually told, ‘You can’t discuss that here’!

Categorically NOT a so-called ‘exposure’ Forum, MAD does, however, both allow and actively-encourage frank and free discussion of any and

every effect and routine between it’s members. We encourage and support the Magical education of our members,in the same fashion you’d find at a ‘physical’ magic-club or organisation.

With varying levels of access to effects taught, dependant upon member-participation, MAD strikes the balance that other forums fear to strive for…all whilst encouraging a real sense of community and fun – hope to see YOU there soon!