Casey At The Bat
by Ernest L. Thayer

The Outlook wasn't brilliant for the Mudville nine that day:
The score stood four to two, with but one inning more to play.
And then when Cooney died at first, and Barrows did the same,
A sickly silence fell upon the patrons of the game.

A straggling few got up to go in deep despair. The rest
Clung to that hope which springs eternal in the human breast;
They thought, if only Casey could get but a whack at that -
We'd put up even money, now, with Casey at the bat.

But Flynn preceded Casey, as did also Jimmy Blake,
And the former was a lulu and the latter was a fake;
So upon that stricken multitude grim melancholy sat,
For there seemed but little chance of Casey's getting to the bat.

But Flynn let drive a single, to the wonderment of all,
And Blake, the much despised, tore the cover off the ball;
And when the dust had lifted, and the men saw what had occurred,
There was Jimmy safe at second and Flynn a-hugging third.

Then from 5,000 throats and more there rose a lusty yell;
It rumbled through the valley, it rattled in the dell;
It knocked upon the mountain and recoiled upon the flat,
For Casey, mighty Casey, was advancing to the bat.

There was ease in Casey's manner as he stepped into his place;
There was pride in Casey's bearing and a smile on Casey's face.
And when, responding to the cheers, he lightly doffed his hat,
No stranger in the crowd could doubt 'twas Casey at the bat.

Ten thousand eyes were on him as he rubbed his hands with dirt;
Five thousand tongues applauded when he wiped them on his shirt.
Then while the writhing pitcher ground the ball into his hip,
Defiance gleamed in Casey's eye, a sneer curled Casey's lip.

And now the leather-covered sphere came hurtling through the air,
And Casey stood a-watching it in haughty grandeur there.
Close by the sturdy batsman the ball unheeded sped-
"That ain't my style," said Casey. "Strike one," the umpire said.

From the benches, black with people, there went up a muffled roar,
Like the beating of the storm-waves on a stern and distant shore.
"Kill him! Kill the umpire!" shouted someone on the stand;
And it's likely they'd a-killed him had not Casey raised his hand.

With a smile of Christian charity great Casey's visage shown;
He stilled the rising tumult; he made the game go on;
He signaled to the pitcher, and once more the spheroid flew;
But Casey still ignored it, and the umpire said, "Strike two."

"Fraud!" cried the maddened thousands, and echo answered fraud;
But one scornful look from Casey and the audience was awed.
They saw his face grow stern and cold, they saw his muscles strain,
And they knew that Casey wouldn't let that ball go by again.

The sneer is gone from Casey's lip, his teeth are clenched in hate;
He pounds with cruel violence his bat upon the plate.
And now the pitcher holds the ball, and now he lets it go,
And now the air is shattered by the force of Casey's blow. 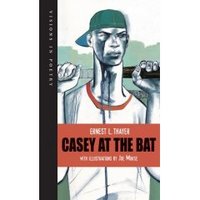 I was trying to figure out what poem to pick while I was going thru my pile of books to be read. And, happiness, in a pile of books sent by Raab Associates I found Casey at the Bat, illustrated by Joe Morse. CATB is part of the "Visions in Poetry" series from Kids Can Press; it matches classic poems with contemporary illustrations.

The result? A poem written in 1888 becomes urban and modern, set in a city with cars, chain link fences and apartment buildings. Instead of being remote, with either an idealized or a historical setting, it is real; it's a poem that is now boy friendly.

Because Casey has been illustrated so many times, I can also see this being used to show how illustrations change and affect the text. Pictures matter; pictures can change or alter meaning. What better way to show that than with multiple versions of the same text?
Some examples:


**********************
Michele starts the party early (Poetry Thursday!) with one of my faves, Gerard Manley Hopkins.
Here in the Bonny Glen brings us some Dylan Thomas (and a solution to what to do with an author whose works are still in copyright).
Chris Barton reviews a book that tours America using art and poetry.
Little Willow brings us David Levithan (Brian will be happy.)
Chicken Spaghetti (also mindful of copyright) with Julia Donaldson (v. v. funny).
Jen Robinson honors her childhood with a classic.
Bookshelves of Doom lets us know that banning also involves poetry.

Updates:
Big A little a, with Once Upon a Tide, a book that is going on my Amazon wishlist;
Blog From The Windowsill shares Wild Geese by Mary Oliver; I'm not sure what I like more about Poetry Friday, being reminded of poems I love or, as here, discovering something new and getting chills;
book buds and ee cummings;
MotherReader with an original Ode to Mo (post a comment already, Mo!);
Farm School and Emily Dickinson;
The Simple and the Ordinary and the Whole Duty of a Poem;
and Mungo's Mathoms brings my favorite, Yeats.

I was just reading Casey at the Bat to Stephen last night. We have the book illustrated by Christopher Bing. That book is a joy to look at. It's full of the greatest little details (like an old time add for throat lozenges on the page where the line says everyone shouted). As much fun to read as to study

What a great contribution, Liz!
I'm off to start linking. You guys got going early this morning :)

Thank you for the link, Liz! Once we've mastered soccer (honey, everyone else is at the other end of the field. near the ball.), we'll try out baseball. But baseball books--we can do that now. Thanks.

There are several great recordings of this now too, including the "Poetry Speaks to Children" anthology. Nice choice for the Boys (and Girls) of Summer.