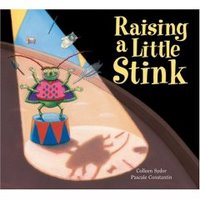 Raising a Little Stink by Colleen Sydor and Pascale Constantin

The Plot: A "lazy old lion" escapes the zoo; the lion yawns and out climbs a lazy old lion tamer; under the lion tamer's hat is a lazy old circus mouse; and in the mouse's ear is a teeny tiny stinkbug. These four, "happy to be free at last," find a little cottage and make themselves at home.

Except three of these four are lazy. The stinkbug does everything, from sewing curtains to making bananas flambe to running out for a remote so that the lion, lion tamer, and mouse don't have to get up to change to the channel on the TV.

The Good: I love how the lazy lion and company just get lazier when they sit around the house doing nothing. And the lion, lion tamer and mouse look so tired that I began yawning.

I liked that, because it was the stinkbug's nature to be a busy bee and doing and acting, that he did stuff for the lion & co., including running their errands. Basically, he was a nice bug being nice; and he was happy to do it. "But the stinkbug ... although he was extremely good-natured, he was definitely nobody's fool." Eventually, the stinkbug says enough. And responds by stinking up the place. So the three lazies take off.

"And [the circus] is where the three lazy creatures remain to this day, for, as the lion likes to point out, working for a living may stink, but it's a bed of roses compared to living with a little stinker." So basically: working stinks.

But it also stinks to be taken advantage of; and I love that the stinkbug puts his foot down and remembers, "it never hurts to raise a little stink every now and then."

Kids Can Press, the publisher, includes a feature where you can look inside the book.
at May 24, 2006