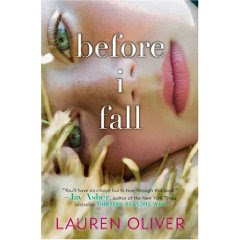 The Plot: Samantha Kingston, 17. A typical Friday: laughing with friends, getting her due as one of the most popular seniors at high school, big plans with her boyfriend. It all ends in screeching brakes and pain -- a car accident. Sam is dead.

What happened? Why is she reliving her last day? Can she change anything about her life and her death?


The Good: Well, I may have a hard time with including all the quotes I want to because this has already been passed on to a teen who wants books that make her cry. A seventeen year old, dying over and over, who spends one of her days giving her eight year old sister a perfect day? OF COURSE I cried.

First things first. Sam is a bitch. No, really. She and her friends (Lindsay, Ally, Elody) are the four popular girls at school, laughing, best friends, having fun, and, oh yes -- sometimes making the lives of others hard. Why? Because. Because they can. Because it's something to do.

Dear Blog Reader, I hated Sam and her friends from the start. On page 5, Sam explains that "[t]here's always going to be a person laughing and somebody getting laughed at. It happens everyday, in every town in America. Probably the world, for all I know. The whole point of growing up is learning to stay on the laughing side." And by page 65, Sam was still justifying her meanness: "[i]t's like high school holds two different worlds, revolving around each other and never touching: the haves and the have-nots. I guess it's a good thing. High school is supposed to prepare you for the real world, after all."

Somehow, though, as the second day rolled around, Sam and her girlfriends grew on me. Part of it is that with each repeated day, Sam becomes more self-aware of herself, her world, her actions. Part of it is that often the girls were fun and funny and supportive of each other, to the point that you wanted to sit all four down and say, "you don't have to be so mean and cruel and thoughtless to others."

Let's be clear about one thing: the point is NOT why these girls are mean. Reasons are given, but it's hardly the A storyline in part because to make it too important gives them an excuse. What I like is that Sam doesn't obsess much about her inner child who is so afraid of being laughed at that she is the first to laugh at others -- instead, she moves to action and trying to figure out if in one short day she can undo, or fix, or help the damage she has done.

So yes, Sam starts as a bitch. But she changes. By living that day over and over, she is given the chance to grow up enough to leave that persona, that face, behind. It's gutsy, I think, for Oliver to have made Sam and company so casually cruel at times. It's true; but it's also hard to read, and your heart bleeds for those they hurt and you hope that more Sams stop inflicting their thoughtless hurts. It's gutsy, even thought it is true, because I'm sure there are some readers who may not hang in there for the whole story and Sam's own redemption.

Other things I liked: there is that "so cool and hot and young and kinda flirty" teacher. You know the one. The one that immature teens think is cool and hot.... and everyone else knows is pathetic because the teacher looks to teens for friendship and acceptance? LOVED Sam's journey in realizing he is that type of cool teacher.

There is also a love story... imagine falling for a guy and then waking up the next morning and its not the next morning, it's the same day, so that "almost kissing"? Never happened, almost or no.
And, of course, I loved what she could and could not change in her repeat days.

I loved this book! It was tremendously satisfying (although I have to admit I did want her to make that one ultimate change in the end that I won't spoile here in case others are like me way too hopeful and optimistic, LOL).

The four friends were definitely Mean Girls but I didn't hate them for it. I kind of got where Sam was coming from in that it's "us or them" kind of mentality. I also think it went a long way to showing her progression through each of the days into what she ultimately became.

I admit, I really wanted to see the reactions of those around her after the end. It was most powerful as written but I'm a girl who likes more!

I just finished reading this one last night and I too loved it. I was skeptical at first and I was worried that I'd be one of the few bloggers who hated it. But when Sam started evolving I got sucked right in.

This book should be coming my way soon and I am excited to read it!

I love when there is real character growth. I will have to put this on my list.

Isn't it wonderful? I think the Morris committee should take note, pretty sure this is a debut novel.