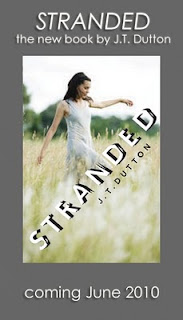 With great reluctance, fifteen year old Kelly Louise and her mother are leaving Des Moines for her mother's hometown of Heaven, Ohio.

Kelly Louise -- named for Tina Louise, of Gilligan's Island fame -- tells of being dragged back to the small town her teen mother escaped from years ago, to live with her cleaning-obsessed Nana and religion-obsessed cousin Natalie. Natalie, fifteen, seems to love unicorns and Jesus equally. Her mother promises it's just temporary, but it's the middle of the school year! It's going to be that much harder for Kelly Louise to get a boyfriend.

Kelly Louise tells this story; and her voice makes this fresh and different; she's funny and amusing, self-centered and a drama queen, and, like Lola from Confessions of a Teenage Drama Queen

and Alice from Alice, I Think

, you're going to alternate between cringing, laughing, and loving her.

But there is a seriousness to this novel; a gravity. Because Heaven is best known for the recent news story about Baby Grace, an infant abandoned in a cornfield.

Dutton's story of the unthinkable -- a baby left to die -- is told against a setting of lost family farms, alcoholism, and second generations of teen pregnancies. Kelly Louise's voice brings humor, and she thinks of herself, first, most of the time. But she also thinks about Baby Grace, and family secrets, and what it means to do the right thing.


Teaser: A mini post about a book I've read that won't be published for several months. The full review will be posted closer to the publication date.

Great teaser! I want to read this book. I can't wait for it to come out.

I just finished Angela Johnson's Heaven trilogy. Loved it. I like what I know about Heaven, Ohio so I think I just might check this out.