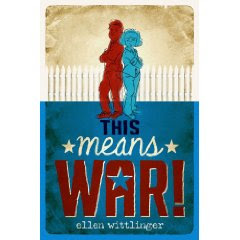 The Plot: Juliet, ten, has lost her best friend, Lowell. Why? Because Juliet is a girl. Six years of friendship mean nothing, now that Lowell is friends with Tommy and Mike. Boys do boy stuff, she is told, and girls do girl stuff.

GO. AWAY. is the message.

Patsy, Juliet's new friend, isn't afraid of anything. Or anyone. One thing leads to another, and suddenly the boys and girls are challenging each other to see who is better, faster, stronger, braver. No matter the risk. No matter who gets hurt.

The Good: This fifth grade battle of the sexes plays out in October 1962, against the backdrop of Cuban Missile Crisis. Wittlinger lets the reader connect their own dots about the motivations and fears of the various kids and parents. For example, Patsy. Patsy adores her father, but he prefers spending quality time with his son, Patsy's younger brother. Patsy loves her father, is interested in what he is interested he, but he cannot see how a girl would be interested in mechanics and airplanes. Patsy never says that the reason she is driven to best the boys in the challenge is to prove something to herself and her father. Juliet never connects those dots, either. Instead, Wittlinger respects the reader, letting them make this connection.

While this would be a good "fiction and nonfiction" match up with Almost Astronauts by Tanya Lee Stone, This Means War is about more than sexism and feminism in the early 1960s.

Yes, Juliet is frustrated at the boys who start drawing lines about what boys like and girls like. Yes, Juliet doesn't see the appeal of giggling over boys, like her older sister Caroline or two girls in school, Annette and Linda. Yes, Patsy's dad echoes these thoughts.

But, Patsy dreams of being a pilot (and, as we know from Almost Astronauts, it wasn't an impossible dream). Other adults voice the belief that it's about what people like, not boys versus girls. And (spoiler alert!), by the end of This Means War, the two groups of boys and girls have gotten to know each other and become one group of friends. Also? This Means War is not critical of those boys who happen to like go carts or those girls who like to dance and giggle about boys. Oh, at the start, Juliet in her unhappiness is critical of Lowell's new friends and of her default friends, Annette and Linda. This changes by the end of the book.

This Means War is not just about the war between two groups of fifth graders; it's the war against prejudices, against fear of change, against the unknown, against oneself. Juliet's parents are at war, with progress and each other. They own a small family grocery store and are losing business to the new supermarkets; money is a frequent topic of argument. Her father is frustrated with the economy and with politics and isn't happy with President Kennedy's leadership.

Meanwhile, there is the Cuban Missile Crisis. In reading historical fiction, especially historical fiction set against the author's own childhood and teen years, I always ask why? Why this time period and not today? Today, there are independent store owners battling for survival (and losing) against chains. Today, there are parents who work and worry about paying bills. Today, on the playground girls and boys sometimes segregate into two groups and battle. And, yes, today, there are still people who think "boys like cars" and "girls like makeup" and don't make allowances for those boys who don't like cars and the girls who do. And yes, today, there are children whose parents are fighting in the military, like some of the children in the book. So why not just set this book in the present?

The Cuban Missile Crisis was a much more defined event than today's always-there threat of terrorism and far-off war. It allows Wittlinger to provide a beginning, middle, and end of the tension and fear the children and their parents experience, providing a much-needed resolution for both Juliet and the reader. At the same time, the reader is left to draw their own parallels between Juliet's experiences and emotions and their own lives in today's world, with terrorist attacks and the ongoing war in the Middle East. Does Juliet hiding beneath her desk to survive a nuclear attack make any more sense than asking children to take off their shoes at airport security?

If at this point you think I've been too spoilery... No. No, I haven't. The boys and girls keep escalating the challenges they give each other, and the danger and risks keep rising. People get hurt and choices have to be made. At the end, can anyone be a winner in a war?

Thank you for this great encapsalution of the many layers of a book I look forward to reading!

I'd be interested to see how it compares to Lisa Yee's "Bobby vs. Girls," which has a very similar theme of a boy and girl being best friends until they get older and other kids insist on gender splits, but has a modern setting (and is much lighter in tone).

Well, Liz, as Jen Robinson says, this is a review that makes me want to read the book! Thanks--will add this to the TBR list for sure. Am thinking my 11yo especially would love it.