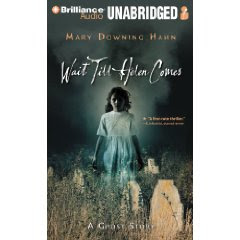 The Plot: Molly, younger brother Michael, and stepsister Heather, a newly blended family, have moved to a house in the country. Heather has never been the most likable child, and she gets even worse now that she has a friend. Helen. A ghost child only Heather can see. Heather's father, Dave, thinks his daughter is imaginative and doesn't understand Molly's concern.

Molly finds out that a nearby home burnt down over a hundred years ago, killing a young girl named Helen. Several children have drowned in a nearby pond. Molly becomes convinced that Heather is in danger. Can she save her stepsister?

The Good: Wait Till Helen Comes is a scary as hell ghost story about not one, but two, mean little girls. Is there anything more terrifying than an evil child? How about an evil child that everyone else thinks is young and nice and harmless?

Heather, seven, is a brat even before Helen enters the picture. She manipulates all those around her and is particularly gifted at getting her father to take sides against his new stepchildren, Molly and Michael, and against his new wife. Helen is not just the ghost egging Heather on; Helen is also a ghost responsible for the drowning deaths of several children over the years.

But that's not the scary part. Oh, it is scary, and kids looking to be scared will love this book. Creepy, atmospheric, spooky, with a very real danger.

That's not what scared me as an adult. As an adult reader, I was appalled at how the stepfather, Dave, treats his stepchildren, his wife, and his own daughter. No physical abuse; but enough nastiness and neglect that I couldn't help but wonder at what type of rebellions Molly, Michael and Heather would have in high school. Molly, given the model that to have a man, you put up with his garbage, is Most Likely To Be In Abusive Relationship. Scientist Michael stops escaping to woods and bugs and starts escaping with drugs. And Heather, looking for the love she doesn't get from Daddy, will be Sixteen and Pregnant.

Let me give some examples. Dave, talking to his ten year old stepson, Michael, says "what kind of little monster are you anyway." And the mother, hearing her child called a monster, does . . . Nothing. Instead, mom tells her children to be nicer. Basically, setting the stage of future dysfunction by modeling the "if you don't piss him off, he won't get mad, just be good so he will stay with us" relationship, rather than the "he's being irrational and over the top in his anger, and I won't put up with me and my kids being treated that way" relationship.

Frankly, it's upsetting. And honestly? Dave isn't that much better with Heather. He flips flops between spoiling her and ignoring her. No wonder Heather is obnoxious -- her father repeatedly rewards her worst behaviour and totally plays into a very uncomfortable wife versus child struggle.

And -- here is the best part -- probably because this is set in the mid-1980s, the book does not really question either parent. Some of the things that make me go "hmmm" are actually typical of child rearing twenty odd years ago. For example, all three children are left alone for long periods of time with limited supervision. Oh, Molly is told to watch the others -- and that, too, is accepted, that a twelve year old will care for a seven year old for hours. Even when everyone knows the two don't get along. Even when everyone knows the seven year old wanders away and does her own thing.

To be honest, Molly says that Dave didn't use to be so bad and blames the ghost. However, none of the ghost stories about Helen mention making adults behave irrationally, as if they were in The Shining. The reader only knows Dave as he is shown in this book. At the end of the book, the ghost is taken care of and some level of harmony now exists between the children. The implication is that Dave is now nice... now that his wife and children no longer give him reason to call them monsters, all is well.

Will kids pick up on just how awful Dave and Mom are? Or will they, like Molly, dismiss it as the influence of Helen? Or are kids so used to parents behaving badly that they won't pick up on it?

Oh! Another thing. Molly narrates the book; she's the main character. She is not a spunky kid. Looking for a girl who is fearful of her own shadow, whiny, clingy, dramatic and a crier? Molly is your gal! Most of this makes sense most of the time -- who wouldn't be freaked out at a haunted cemetery, haunted house, killer ghost? Not to mean mean stepfather and mom more concerned with that new sister? I sure wouldn't be going into that graveyard, and I've been known to cry from frustration or fear. Molly is ultimately driven to action -- her parents don't believe her about the killer ghost, so someone has to save Heather.

I know it may sound like I don't like this book; quite the opposite! I LOVE IT. So creepy, and it got my dander up. I was just so floored at the parents. Ellen Grafton is a terrific narrator; she captures Molly's hysteria and dramatics and fear perfectly.

I adored this book when I was little. Sounds like I should pull it out and give it a re-read. :) Thanks!

I completely forgot this book existed until I saw the title on your Twitter feed. And now it's coming back to me, but much of my memory is foggy. I can't really handle scary stories any more, so I don't know how I did it as a child!

I can't believe I didn't read this book when I was younger! I just ordered it, thanks for the excellent review!

4th and 5th grade students love this author's scary books! I haven't read this one but others. You make it sound worth reading though!

But, HOORAY! I still think it's so funny that we picked it up in tandem!

This book TERRIFIED me when I was a kid, and yet I read it over and over again. I think my mom finally made it be "lost" when I continued to freak myself out with it (we lived very near a cemetery for a while).

I remember hating Dave, but I think when I read this he was just the evil stepdad with the horrible daughter. Thanks for pointing out all the real reasons he's horrible.